Classic Films in Focus: THE SEARCHERS (1956) 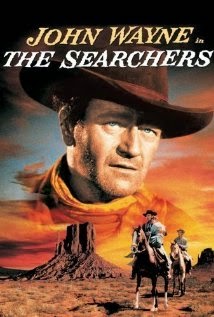 The darkest and most iconic of John Ford's Westerns, The Searchers (1956) also presents cowboy legend John Wayne in one of his most psychologically complex roles as a man whose attitudes and decisions clearly place him on the losing side of history. Ford offers all of the elements that serve as his genre hallmarks: Monument Valley's desolate grandeur, Wayne's rugged masculinity, and moments of domestic humor that leaven the narrative's somber tone. Many of Ford's favorite stock players bring their contributions, as well, including Ward Bond, Olive Carey, Ken Curtis, Hank Worden, and Harry Carey, Jr. The story, more or less faithfully adapted from the novel by Alan Le May, resonates powerfully thanks to Ford's approach and the thoughtful performances of the principal stars, making The Searchers essential viewing for Western fans and anyone interested in the art of cinema.

Wayne plays former Confederate soldier Ethan Edwards, who returns home to visit his brother's family just before they are brutally slaughtered in a Comanche attack led by Scar (Henry Brandon). The raiding party abducts Ethan's nieces, the only survivors, prompting Ethan to set out on a quest to reclaim the girls. Martin Pawley (Jeffrey Hunter), a young man taken in by the Edwards clan, joins Ethan in the search, even though many years pass before they find any trace of Debbie (Natalie Wood), who has since grown up as part of the Comanche tribe.

Wayne's character is undoubtedly the protagonist of this adventure, but his role as hero is not so clear, especially when we understand that he means to kill Debbie in order to erase the sexual and racial pollution of her Comanche experience. Ethan harbors an intensely racist hatred for the Comanche, partly as a result of his mother's death in an earlier raid, but his decision to fight for the Confederacy in the Civil War suggests other, connected prejudices as part of his basic nature. Ford also hints at Ethan's adulterous love for his brother's wife, Martha (Dorothy Jordan); his dogged quest for revenge might be as much about penance for his own sins as it is about family honor, Debbie's suffering, or any heroic impulses.

The other participants in this drama have more straightforward motivations. Jeffrey Hunter's handsome features perfectly express the loyalty and sincerity of Ethan's constant companion, Martin, who takes a more progressive view of Native Americans thanks to his own racially mixed heritage. Martin first joins Ethan to save the girls from the Comanche raiders, but he ultimately stays, despite the life and love that slip through his fingers at home, to save Debbie from Ethan himself. Sisters Lana and Natalie Wood play Debbie in the bookend scenes that frame the central search, and both make the most of their brief appearances. They remind us that Debbie is a person in her own right, not merely a symbol of Ethan's failures or the unwilling embodiment of his deepest fears. The film might stir our consciences with its depiction of Ethan's deadly prejudice, but it falls back on genre stereotypes in the casting of the German actor Henry Brandon as Scar, an absolute villain who revels in showing off his collection of settlers' scalps.

Be sure to appreciate leading lady Vera Miles in a supporting role as Martin's love interest, Laurie. For more of John Ford's Westerns with John Wayne, see Stagecoach (1939), She Wore a Yellow Ribbon (1949), and The Man Who Shot Liberty Valance (1962). Jeffrey Hunter stars in Belles on Their Toes (1952), King of Kings (1961), and The Proud Ones (1956), but he is also remembered today as the original captain of the USS Enterprise in the pilot episode of Star Trek. You'll find Vera Miles in The Wrong Man (1956), Psycho (1960), and in The Man Who Shot Liberty Valance, while Natalie Wood stars in Rebel without a Cause (1955), West Side Story (1961), and Splendor in the Grass (1961).
Posted by Jennifer Garlen at 4:03 PM