Classic Films in Focus: SINBAD AND THE EYE OF THE TIGER (1977) 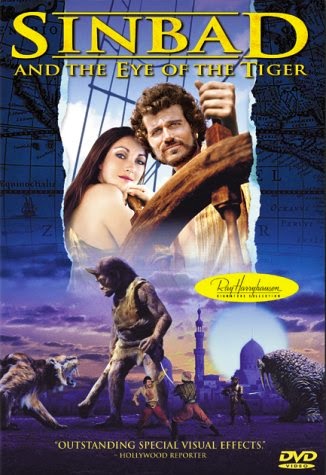 As the third and final Ray Harryhausen movie to feature the legendary hero, Sinbad and the Eye of the Tiger (1977) arrives fairly late in the special effects icon’s canon; his last feature, Clash of the Titans (1981), would come just a few years later. While Harryhausen, working as both a producer and special effects creator for his films, still dominates the production with his expansive imagination, Sinbad and the Eye of the Tiger also takes note of the changing times by having a more glamorous and noteworthy cast in addition to its stop-motion stars. Patrick Wayne and Taryn Power, both the children of screen legends, take leading roles, and the stunning Jane Seymour also stars as Sinbad’s love interest. The result is a movie that belongs very much to its era but still offers plenty to entertain nostalgic Gen Xers and devoted fans of Harryhausen’s particular genius.

Patrick Wayne stars as Sinbad, who sets out on a mission to save his friend, Prince Kassim (Damien Thomas), after the evil sorceress Zenobia (Margaret Whiting) changes him into a baboon just before his coronation. Kassim’s sister, Farah (Jane Seymour), accompanies Sinbad and his crew because she alone can manage the bewitched prince, who grows more bestial with each passing day. They sail far in search of Melanthius (Patrick Troughton), a wise man who might be their only hope of restoring the prince to his true form. With help from him and his daughter, Dione (Taryn Power), our heroes then race to a climactic showdown with Zenobia in a dangerous and magical land.

As always, the fantastic setting provides Harryhausen with many opportunities to create and animate bizarre creatures. Chief among these is the baboon version of Prince Kassim, who interacts with human performers very convincingly, especially in the close quarters of Sinbad’s ship. Kassim reacts with horror to his own reflection, plays chess against human opponents, and even expresses the transformed prince’s romantic interest in Dione, a subtle and complicated concept given the limits of animation and a baboon’s face. Other notable creatures in this adventure include the metal minotaur that serves Zenobia, the gentle Trog who helps our heroes, and the fearsome sabre-toothed cat that appears during the final climax.

Nobody in the human cast is turning in a really brilliant performance, but they look good and seem game enough for the weird experience of acting against stop-motion costars. Patrick Wayne, the son of Western icon John Wayne, sports a gloriously 70s head of curls to go with his disco-era paisley tops, but he lacks the bold screen presence of a true swashbuckler. Jane Seymour is, of course, gorgeous as the princess, and Tyrone Power’s daughter, Taryn, makes a very striking blonde counterpart to Seymour’s brunette beauty. Both show a good bit of skin, but they also get to play important roles in the adventure and are not merely screaming victims to be rescued by men. Margaret Whiting might be chewing the scenery as the scheming Zenobia, but she is certainly memorable, and she has to be larger than life herself as the creator of so much magical mischief. Having already appeared in Jason and the Argonauts (1963), Patrick Troughton brings experience with the Harryhausen world as Melanthius, and it’s always good to see the Doctor Who star in a different light, even if he is more or less unrecognizable under all that hair.

See The 7th Voyage of Sinbad (1958) and The Golden Voyage of Sinbad (1973) for Ray Harryhausen’s other adventures with the Arabian hero. Sam Wanamaker, who directed Sinbad and the Eye of the Tiger, was more productive in his career as an actor and mostly directed for television. Patrick Wayne appeared in several movies with his father, including The Alamo (1960), McLintock! (1963), and Big Jake (1971). Taryn Power only made a handful of films, but Jane Seymour can be found in Live and Let Die (1973), Battlestar Galactica (1978), and Somewhere in Time (1980). If you enjoy the fantasy East of the Harryhausen movies, try either the 1924 or the 1940 version of The Thief of Bagdad.
Posted by Jennifer Garlen at 10:10 AM