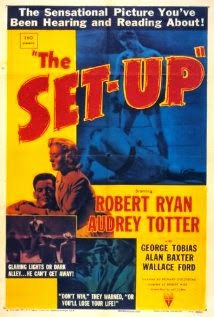 With Robert Ryan as his punching bag protagonist, director Robert Wise delivers one of film noir’s most staggering blows with The Set-Up (1949), an unsparing revelation of boxing’s dark side and the bloodthirsty nature of the crowd. Playing out in real time, The Set-Up follows Ryan’s veteran boxer through one fateful night in his career, where the violence of his life in the ring is contrasted by the anxious tenderness of his wife. The fight scenes in this movie are justly celebrated for their realism, but the heart of The Set-Up lies in the wrenching performances of Robert Ryan and Audrey Totter, who press upon us the human cost of other people’s business and pleasure.

Ryan plays Bill “Stoker” Thompson, a twenty-year veteran of the ring whose manager (George Tobias) arranges for him to lose a fight without informing Stoker himself. Stoker believes that he can win the match; he pines for the moral support of his wife, Julie (Audrey Totter), but she can no longer bear to see him take a beating before the pitiless mobs of spectators who fill the stands every night. Little does Stoker know that if he wins the fight he will have to face the wrath of the dangerous mobster Little Boy (Alan Baxter) and his vicious thugs.

The camera shows us two sides of the boxing world, reversing our sense of who is the more violent, the fighter or the spectator for whom he fights. The boxers, gathered in their locker room, embody dignity, resignation, and mutual respect. Even a young black boxer is treated as an equal and a brother, while a nervous first-timer receives encouragement from the battle-scarred elders. The crowd, on the other hand, pulses with murderous inhumanity; even those we most expect to show pity have none. A blind man and an old woman scream for blood as lustily as any of their peers; they care nothing for the men whose bodies are broken to provide them with a night’s amusement. As brutal as the actual fight scenes are, they are nothing compared to the monstrous appetite of the insatiable crowd.

Audrey Totter, usually associated with femme fatale roles, delivers one of the best performances of her career as Julie, who remains outside throughout the fight. Julie’s anguish reminds us that the fighters are not only human beings but husbands, lovers, fathers, and sons. Each blow that lands wounds a body loved by someone who becomes another casualty of the bloody sport. Unable to bear witness to another fight, Julie roams the city, her eyes filled with anxious hope and terrible dread. To her the aging boxer is not “Stoker” but Bill, the man she loves too much to endure the gory spectacle of his suffering. Still, she will not be spared; her reunion with Bill in the final moments of the film offers a tender but tragic coda to the cruelty that has come before.