Classic Films in Focus: BEYOND A REASONABLE DOUBT (1956) 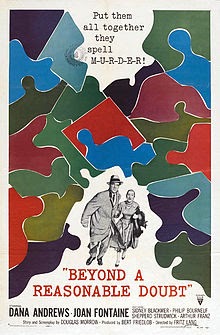 Fritz Lang directed Beyond a Reasonable Doubt (1956) quite late in his career, almost forty years after he got his start making silent films in Germany, but this courtroom noir has a lot in common with the director’s earlier pictures, especially in terms of suspense. Like M (1931), Fury (1936), and The Woman in the Window (1944), Beyond a Reasonable Doubt plays with our expectations about criminals and crime, making the assurance of its title a striking counterpoint to our own evolving uncertainty as the narrative unfolds. Legal experts might find numerous bones to pick with its representation of the judicial process, but film noir fans who like their thrillers pitch black will enjoy this twisted thrill ride through the dark, which also offers a particularly effective performance from Dana Andrews as its leading man.

Andrews plays up-and-coming novelist Tom Garrett, who wants to postpone his wedding to the stylish Susan (Joan Fontaine) so that he can prove his talent by finishing his second book. Susan’s father, Austin Spencer (Sidney Blackmer), happens to be Tom’s former boss in the newspaper business, and he intrigues Tom with a scheme to protest the death penalty by framing an innocent man for murder. Assured by Austin that he will be exonerated before an execution can take place, Tom agrees to be the guinea pig and incriminate himself in the murder of a burlesque dancer, but he eventually comes much closer to the electric chair than he expected.

The story might or might not work as a commentary on the death penalty, given how things turn out, but it certainly succeeds at casting doubt on the whole process by which criminal cases are tried. The district attorney, Roy Thompson (Philip Bourneuf), takes a hard line on crime mainly because he aspires to become governor, not because he has any particular devotion to justice. Tom is indicted, then tried and found guilty solely on the basis of circumstantial evidence; the idea that a jury might be persuaded to execute a man on such flimsy evidence proves their susceptibility to the ambitious attorney’s slick courtroom tactics. Our own doubts increase as we see Austin and Tom planting and documenting their clues; might Austin have an ulterior motive in playing this dangerous game? Might Tom?

If the men come off as untrustworthy, the women at least can be relied on for their honesty, even when they themselves are being deceived. Joan Fontaine plays Susan as a smart, sensible woman accustomed to being treated as an equal, so we know that no good can come of Austin and Tom’s decision to keep their whole plan a secret from her. With her elegant carriage and carefully selected clothes, Susan is the opposite of the brassy, low-brow Dolly Moore (Barbara Nichols), a stripper who becomes the key witness in Tom’s trial, but Susan is also a foil to the unseen Patty Gray, the murdered girl whom Tom is accused of strangling. Patty might be the closest this movie comes to a femme fatale, but because she is already dead her influence on the other characters and the plot remains ghostly, uncertain, a matter of secondhand gossip and half-remembered history. She’s a blue-collar Rebecca, haunting the narrative until the truth comes out in the shocking final scene.

Beyond a Reasonable Doubt is currently available for streaming on Warner Archive Instant.
Posted by Jennifer Garlen at 5:50 PM