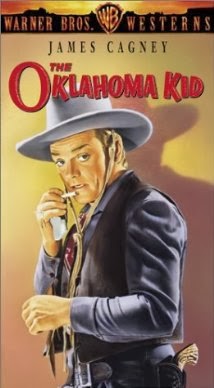 Given its focus on the settling of Oklahoma and the founding of Tulsa, The Oklahoma Kid (1939) almost certainly has its fans in the Sooner State, but for the most part this Warner Bros. Western is a fairly routine oater, with plenty of stock characters and plot elements to amuse the matinee crowd. It does, however, boast a very unusual pair of lead actors in James Cagney and Humphrey Bogart, who don cowboy hats and spurs to fight it out as the free-spirited Oklahoma Kid and his scheming nemesis, Whip McCord. Classic movie fans will find that combination hard to resist, if only because of curiosity, and the picture also offers solid supporting performances from favorites like Donald Crisp and Ward Bond. It’s by no means one of the great Westerns, but The Oklahoma Kid has enough going for it to make it worth seeing, even if it simultaneously proves that neither of its iconic stars is really cut out for the genre.

Cagney plays the footloose Oklahoma Kid, who finds his territory changing as Western expansion brings white settlers to the fertile Cherokee Strip. The Kid makes an enemy of Whip McCord (Bogart) and his gang by appropriating their stolen cash for himself, but things get personal when McCord frames an upstanding citizen, John Kincaid (Hugh Sothern), for murder, not knowing that Kincaid is the Kid’s estranged father. While the Kid’s brother, Ned (Harvey Stephens), and Judge Hardwick (Donald Crisp) try to use the law to free Kincaid, the Kid looks for a different kind of justice to bring McCord and his henchmen to account for their crimes.

Both Cagney and Bogart are great actors, but neither of them really looks at home on the range. They are much more credible as urban gangsters in their other movies together, like Angels with Dirty Faces (1938) and The Roaring Twenties (1939), and in their films alone. It’s easy enough to imagine more familiar Western stars replacing them in The Oklahoma Kid and bringing more authenticity to their roles, but both performers give it their best effort. Bogart, an excellent heavy in The Petrified Forest (1936), knows how to seethe and look dangerous, even if his black outfit and oddly Victorian head of hair don’t quite suit him. Cagney plays the Kid as a typical Cagney character from this era, a mixture of menace and good humor, always occupying the vast gray area of moral territory. When he isn’t stealing things or getting into gunfights, he flirts with Ned’s girlfriend, Jane (Rosemary Lane), and sings Spanish lullabies to Mexican babies. We can believe in both the amiable Cagney and the dangerous one, even if we never quite buy the idea that he’s an actual cowboy.

The supporting players in The Oklahoma Kid prove more credible as denizens of the Western frontier, especially genre stalwart Ward Bond as a member of McCord’s outlaw gang. Donald Crisp, always reliable as a paternal authority figure, brings his usual gravitas to the role of Judge Hardwick, who likes the Kid even though they have very different views on civilization and the law. Rosemary Lane makes a pretty love interest for Cagney, although the idea of the Kid’s rivalry for her with his brother, Ned, goes mostly undeveloped, and Harvey Stephens has very little to do as Ned until the final scenes of the picture. Other familiar faces in the background include Charles Middleton, Arthur Aylesworth, and Trevor Bardette as residents of frontier Tulsa, along with the chronically uncredited Stuart Holmes in a brief appearance as President Grover Cleveland.

Lloyd Bacon, who directed The Oklahoma Kid, made a steady stream of pictures for Warner, including 42nd Street (1933), Marked Woman (1937), and Knute Rockne All American (1940). Bogart made another attempt at the Western with Virginia City (1940), while Cagney returned to the genre for Tribute to a Bad Man (1956), but it’s better to see them in their natural habitats first. You’ll find Rosemary Lane in Hollywood Hotel (1937), The Return of Doctor X (1939), and Trocadero (1944). Don’t miss the venerable Donald Crisp in the excellent Anthony Mann Western, The Man from Laramie (1955), although he is best remembered today for his fatherly roles in How Green Was My Valley (1941), Lassie Come Home (1943), and National Velvet (1944). 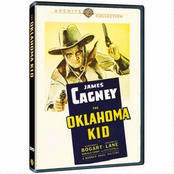 The Oklahoma Kid is now available on DVD from Warner Archive. Warner provided the reviewer with a free copy of the film, with no promise or expectation of a positive review.
Posted by Jennifer Garlen at 11:10 AM