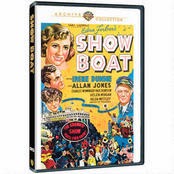 James Whale is best remembered today as the director of horror films like Frankenstein (1931), but he also made the 1936 adaptation of Show Boat, the successful Kern and Hammerstein musical based on Edna Ferber’s novel. It was neither the first nor the last big screen rendition of the story; Laura La Plante starred in a 1929 production, and a 1951 version featured Kathryn Grayson, Ava Gardner, and Howard Keel. The 1936 adaptation is, however, generally considered the best and most faithful of the three, and it benefits tremendously from the contributions of many performers who had appeared in the original stage production, including Charles Winninger, Helen Morgan, and Paul Robeson. As the director, Whale carefully balances the serious and comic elements of the expansive plot, and the end result is a moving, engaging musical that every fan of the genre ought to see.

Irene Dunne stars as Magnolia Hawks, who grows up on her father’s show boat in the late 19th century. Cap’n Andy (Charles Winninger) and his formidable wife (Helen Westley) don’t agree on most issues, including their daughter’s friendship with singer Julie (Helen Morgan), and Mrs. Hawks disapproves even more when Magnolia falls in love with Gaylord Ravenal (Allan Jones), a handsome roving gambler. Magnolia endures ups and downs as she becomes a performer herself, while Julie suffers hardship and heartbreak after her racial identity is revealed by a jealous admirer.

The cast of the film is large, but nearly every actor makes the most of his or her role, and the majority of the stars had already played the same parts in earlier stage productions. Almost 38 years old when she made the picture, Irene Dunne is much too mature to play the teenaged Magnolia, but no actress could be the right age all the time in a story that spans some forty years in its characters’ lives. She gives the heroine some spunk to go along with her sentimental nature, and Dunne ultimately proves her ability to embody the many moods and moments of Magnolia’s experience. Allan Jones, with his clean cut, almost cherubic, good looks, makes a very tame version of a riverboat gambler, but of course he sings beautifully, especially in numbers like “Make Believe,” and we can see why Magnolia loves him. Charles Winninger has a great deal of fun as the perpetually upbeat Cap’n Andy, while Helen Morgan gives a subtle but heart-breaking performance as the selfless Julie. The showstopper of the picture is Paul Robeson performing his iconic rendition of “Ol’ Man River,” but Robeson also has some effective scenes with Hattie McDaniel, who plays his wife, Queenie.

The racial plot involving Julie and Steven (Donald Cook) is the most memorable element of the story, and it was certainly controversial in the 1930s, but really Show Boat is about romantic relationships and what makes them last or fall apart. We have a handful of couples to take as models or object lessons: Magnolia and Gaylord, Mr. and Mrs. Hawks, Julie and Steven, Frank and Elly, and Queenie and Joe. All have their problems, whether humorous or tragic, but the recurring theme of the song, “Can’t Help Lovin’ Dat Man,” argues that people can’t choose who or whether they love, even if their partners bring them unhappiness. Julie can’t help loving Steve, even after he abandons her, and Magnolia never stops loving Gaylord, despite some twenty years of separation.

Show Boat is also memorable for its musical numbers, and Whale’s adaptation works hard to retain as many of the songs as possible, although some favorites like “Life Upon the Wicked Stage” get reduced to instrumental allusions rather than full performances. The minstrel songs, particularly one where Irene Dunne appears in blackface, contrast their outmoded racial imagery with the miscegenation plot’s strikingly progressive tone, but Paul Robeson’s performance overpowers all of that with its arresting subtlety and depth, especially during his signature number. Later black-listed for his left-wing politics, Robeson gives one of the first truly great film performances by an African-American actor; his “Ol’ Man River” sums up the mingled resignation, dignity, and suppressed anger of a people enduring generations of oppression. Few, if any, movie musicals can boast a song that even comes close to matching the emotional impact of that performance.

Sadly, Show Boat would be the final screen appearance of Helen Morgan, who died in 1941. Her life story became the basis for the 1957 biopic, The Helen Morgan Story. Irene Dunne is best remembered today for films like The Awful Truth (1937), Love Affair (1939), and I Remember Mama (1948). You can see and hear more of Allan Jones in A Night at the Opera (1935) and The Firefly (1937). Charles Winninger has memorable roles in Babes in Arms (1939), Destry Rides Again (1939), and State Fair (1945). While Paul Robeson's screen career ended in 1942 with just thirteen appearances, Hattie McDaniel went on to make history as the first African-American to win an Oscar for her performance in Gone with the Wind (1939); when she died in 1952, she had played nearly 100 film roles, many of them uncredited.

Warner Archive has provided the author with a free review copy of this film, with no promise or expectation of a positive review.
Posted by Jennifer Garlen at 9:45 AM