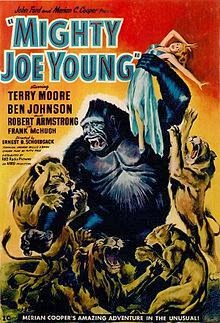 King Kong (1933) gave rise to a whole host of subsequent gorilla movies, beginning with The Son of Kong (1933), but Mighty Joe Young (1949) merits special attention because it marks the feature film debut of one of the greatest innovators in special effects history, Ray Harryhausen, who worked on the stop-motion sequences in the picture along with King Kong veteran Willis O’Brien. Those who watch Mighty Joe Young today probably do so because of Harryhausen’s involvement with the production, and his ability to invest a stop-motion character with incredible emotion and vitality is on full display in the expressive Joe. The human cast are solid in their performances, and the story is interesting if a bit overblown toward the end, but this is the big gorilla’s movie from start to finish, and Harryhausen’s Joe does not disappoint.

Robert Armstrong plays Max O’Hara, a showman who travels to Africa to promote his latest nightclub scheme, which features an African theme and live lions behind glass. There he encounters the gigantic Joe and his companion, Jill (Terry Moore), whom he convinces to travel to America in order to be the headline act at the club. Jill soon realizes that leaving home was a big mistake, especially since Joe is condemned to life in a cage, but Max is reluctant to give up his profitable stars. When thoughtless patrons provoke Joe into a violent rampage, Jill and her cowboy friend, Gregg (Ben Johnson), must escape with the big ape in order to save his life.

From his first appearance on the screen, Joe is a fascinating character. His capacity for violence quickly becomes evident, but the travelers and the audience are surprised by his gentleness with Jill, who bosses him around like an overgrown baby or an unruly pup. Joe has soulful eyes that sometimes widen with surprise or blaze with fury; we sympathize with him as a real individual, forgetting that he is a special effect when he mourns his imprisonment or lashes out during a moment of drunken panic. He can be funny or tragic, brave or bestial, depending on what happens around him. Harryhausen uses subtle changes in body language and facial expression to suggest depression, disgust, and even uncertainty, making this early creation one of his most human characters and also paving the way for creatures seen in later films like Jason and the Argonauts (1963), Sinbad and the Eye of the Tiger (1977), and Clash of the Titans (1981).

The human actors support the simian star admirably and help us to believe in Joe by their reactions to him. Robert Armstrong, a veteran of both King Kong and The Son of Kong, brings plenty of experience acting against animated apes to his role as the overeager producer, Max, but he also evinces a great talent for comedy in his scenes with Joe and an uncooperative horse early in the film. Relative newcomer Terry Moore plays one of her first really significant roles as Jill; she has a fresh-faced sweetness that justifies her gullibility as well as the strength of character to make us believe that she can handle a rampaging giant gorilla all by herself. Of the three lead actors, Ben Johnson is the most familiar to modern viewers, although Gregg is one of his first big roles, as well, and the Oklahoma cowboy functions as a gentler, younger version of the kind of Western character Johnson would go on to play. The subdued romance between Jill and Gregg is a sweetly played sidenote to the central plot, with both Moore and Johnson expressing a very G rated passion that even the youngest viewers won’t find offensive. Their one really romantic moment quickly gives way to a fiery climax involving a burning orphanage, where Joe once again dominates the screen.