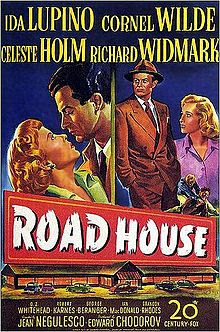 Long before Patrick Swayze made the 1989 movie with the same name, Road House (1948) provided an entertaining if dangerous stop for travelers on film noir's dark highway. It isn't the first noir film a classic movie fan should see, but it provides plenty of action and interest and has held up over time quite well. Well-versed noir watchers will want to see it for the performances of such usual suspects as Ida Lupino, Cornel Wilde and Richard Widmark, all doing their thing very satisfactorily in this lesser known example of noir style.

The road house in question belongs to Jefty, who would seem like an okay guy at the beginning if he weren't being played by Richard Widmark, who had become permanently associated with maniacal noir psychopaths thanks to his brilliantly deranged performance in Kiss of Death in 1947. Needless to say, we are supposed to see right away that Jefty's friendship with house manager Pete (Wilde) is going to get ugly, especially after Jefty brings sexy Lily (Lupino) in as the new bar entertainer and his own prospective love interest. Things go south from there, which everyone except Pete can see coming from a mile away; even Pete's sensible, loyal pal, Susie (Celeste Holm), a quintessential good girl type, knows enough to lie to Jefty to protect Pete and Lily from his jealous passion. Susie's caution turns out to be justified, and of course Jefty eventually becomes completely unglued. There's a great scene near the end with him shooting a can of tomato juice and then giggling dementedly that it "looks like blood!"

Widmark is a thrill to watch, like a sleazier Kirk Douglas with a nervous tic; there's a reason he kept getting this kind of role. Wilde makes a perfect straight guy foil; he had been equally noble and equally clueless in the 1945 classic, Leave Her to Heaven. He has the kind of big, open face that just suits a boy scout and a dupe. Ida Lupino's Lily is an interesting character because she isn't really a femme fatale at all; she rejects Jefty's attentions and pursues Pete with very pure motives, even though she realizes that she might be horning in on Susie's territory. To be fair, Pete obviously doesn't return Susie's romantic affection, and Susie admits defeat with considerable grace. Celeste Holm is wonderful in the role, perhaps a little too good, since you might end up wondering why Pete couldn't be attracted to this warm, wise-cracking character instead of Lupino's alluring but prickly Lily. It's not that Lupino isn't great, but her chain-smoking, world weary chanteuse just bristles with misery, and she seems torn between keeping Pete at arm's length and reeling him in. You'll have to decide for yourself whether you like her singing in the film; as Susie says, "She does more without a voice than anybody I've ever heard!" Rather than being dubbed, as was pretty common for actresses at the time, that really is Lupino singing, and her voice is more distinctive than strictly musical.

As a whole, the picture can be taken as an object lesson on how to handle romantic rejection. Jefty would be the example of how not to approach the problem, while Susie shows us how to take rejection on the chin. It's interesting how the movie engineers the situation of the final scenes so that Susie remains a constant presence; she doesn't really need to be there for any practical reason from the characters' perspectives, although she clearly serves an important function for the resolution of the plot. If there are problems with the film, they lie in that resolution and in Susie's distractingly appealing character. Realistically, the end of the movie creates as many problems for the remaining characters as it solves, and we don't get any sense of how the story of what happened is going to play back in town and in front of a jury. If you can forgive the film for these foibles, there are plenty of other attractions to enjoy, especially Widmark's delightfully insane Jefty and some very arch dialogue from both Lily and Susie, as well as a thrilling bar fight scene that completely wrecks the set. Overall, it's certainly worthwhile to pay a visit to Road House.