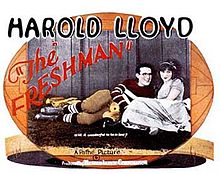 "Go out and win one for the Gipper!"

Fall is the perfect time to explore classic Hollywood's cinematic celebrations of one of America’s great passions, the game of football. Classic football movies tend to feature college teams like West Point and Notre Dame, and they often focus on the determined coaches who lead the teams rather than the players themselves, although underdogs and beloved legends also get the star treatment. Here are ten classic movies that depict America’s love affair with football. You'll find silent film star Harold Lloyd at the kick-off with The Freshman (1925) and the Duke himself, John Wayne, scoring the final touchdown as an embattled college coach in Trouble Along the Way (1953). 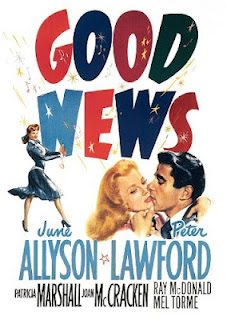 An all-star cast makes Knute Rockne the standard for classic football movies, with its sentimental charge to "win one for the Gipper" one of Hollywood's most quotable lines. Pat O'Brien stars as the dedicated coach, with Donald Crisp and Ronald Reagan as supporting players. Based on the story of the real life Notre Dame coach, the film celebrates the legendary coach's contributions to the game and ensures that Ronald Reagan will forever be known as "the Gipper," even to people who have never seen the film.

With a screenplay by Betty Comden and Adolph Green, Good News stars Peter Lawford as a college football star and June Allyson as his coed love interest. Originally a stage musical and already made into a film in 1930, Good News is set on a college campus during the 1920s. The song, "Pass That Peace Pipe," earned an Oscar nomination, thanks in part to an energetic performance by Joan McCracken. 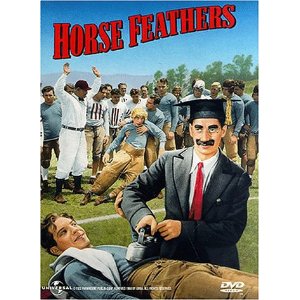 The Marx Brothers make a mockery of college and its sacred institutions in this wacky farce, with straight man Zeppo actually playing the son of his real life brother, Groucho. The usual antics ensue as Groucho, Chico, and Harpo introduce chaos at every turn, and the final scene brings the entire Marx crew onto the field for some truly unorthodox plays, including a touchdown made in a horse-drawn garbage cart.

Although it looks like very few, if any, of these movies are available for streaming on Netflix, you will find several that you can rent for streaming from Amazon at $2.99 per movie.

An earlier version of this article appeared on Examiner.com. The author retains all rights to this content.
Posted by Jennifer Garlen at 8:43 PM