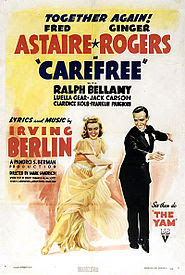 The name, Carefree (1938), pretty much sums up the atmosphere of this light romantic comedy featuring classic movie favorites Fred Astaire and Ginger Rogers. In this outing, as in all of their best known films, Fred and Ginger dance on unperturbed by life's grittier concerns, singing and dancing their way to love against a backdrop of wealth and country club ease. Although it is not as famous as big hits like Top Hat (1935) and Swing Time (1936), Carefree is a charming musical comedy, sure to delight fans of the genre and those who value the breezy elegance that Rogers and Astaire embody so well.

Astaire plays psychiatrist Tony Flagg, who agrees to see his friend's intended bride because she keeps breaking off their engagement. Ralph Bellamy is the friend, Stephen Arden, and, of course, Ginger Rogers appears as the uncertain bride, Amanda. The good doctor employs various techniques to get to the root of his patient's reluctance to go through with the marriage, but in the course of his ministrations Amanda falls for him, putting everyone involved into a series of awkward situations. Along the way, we get several lively song and dance numbers, with music from Irving Berlin, and some very funny comedic scenes.

To watch Fred and Ginger dance is to see people defy gravity. Astaire is a lighter, more refined dancer than Gene Kelly, whose more masculine and athletic style would eventually come to dominate the musical genre. Both approaches have their attractions. "The Yam" dance number is an especially energetic example of Astaire and Rogers at work, and Ginger seems to be having a very good time singing in that one, too, even if the song is really quite silly. Astaire's solo dance early in the film, which begins with a harmonica and ends with golf clubs, is also great fun. This is a short picture with a limited number of show-stopping sequences, but that might be a good thing, since the viewer never feels overwhelmed by them.

The movie begins with some seriously outdated comments about women from the cynical Tony, and one has to wonder about the ethical problems of his constant manipulation of his patient's thoughts, especially as he tries to force Amanda to love Stephen by hypnotizing her. The film's sexist assumptions are trumped, however, by Ginger Rogers' sparkling comedic performance. Not only is she better looking than Astaire, but she's funnier, too, and Carefree gives her ample opportunity to demonstrate her gift for comic mischief. Whenever Tony alters Amanda's mental state, chaos ensues, and Rogers gleefully romps through these scenes. She's similar in many ways to Lucille Ball, only she never seems sorry or embarrassed, even when she glides to the altar with a black eye in the closing scene. Carefree is really Ginger's movie, and she is truly a delight to watch. In 1941 she would win an Oscar for her performance in Kitty Foyle: The Natural History of a Woman (1940), beating competitors as daunting as Bette Davis and Katharine Hepburn. Watching Carefree helps us to see why she deserved to be in such company, not merely for Kitty Foyle but for her whole career as an actress.

Director Mark Sandrich, who led several of the Fred and Ginger pictures for RKO, oversees the hilarity here, as well. The supporting cast members also add to the fun. Luella Gear is great as Amanda's Aunt Cora, while the wonderful character actor Jack Carson backs Astaire as Tony's assistant, Connors. Clarence Kolb evokes laughs as Judge Joe, and we also get Hattie McDaniel from Gone with the Wind (1939) appearing in yet another uncredited role as the maid, Hattie. At least she gets a good line in during the brief time she has on screen.