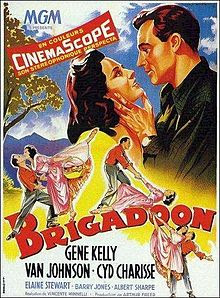 Adapted from the popular 1947 musical from Lerner and Loewe, Brigadoon (1954) is merely a modest success in comparison to other Gene Kelly vehicles like An American in Paris (1950) and Singin’ in the Rain (1952), but it’s still a reasonably entertaining outing for fans of the charismatic star. Supported by costars Van Johnson and lovely Cyd Charisse, Kelly offers his usual mix of dance and romance, and Vincente Minnelli’s direction keeps the narrative moving, but Brigadoon lacks the robust energy of Kelly’s best films. Its fairy tale image of Scotland is charming enough, however, that most fans of the musical genre will like the movie even if they don’t love it.

Kelly stars as Tommy Albright, an American tourist who stumbles upon the idyllic village of Brigadoon during a hunting trip through Scotland. Tommy and his cranky pal, Jeff (Van Johnson), quickly notice some strange aspects of life in Brigadoon, but Tommy also notices the charms of local lass, Fiona (Cyd Charisse). It turns out that Brigadoon is an enchanted place that only wakes up once every hundred years, and at the end of the day it will vanish into the mist for another century. As a village wedding thrusts the community into unexpected crisis, Tommy must decide if his love for Fiona means more to him than his life in the normal, modern world.

Brigadoon is very much a fantasy of Scotland, decorated with plaids and armloads of heather. The patently artificial sets give little sense of the real Scottish countryside, just as the inhabitants of Brigadoon reflect none of the turmoil of eighteenth-century Scottish identity. Witches, identified by the villagers as the threat that inspired the “blessing,” had ceased to be a big concern in Scotland by mid-century, although they fit the fairy tale plot much better than Jacobite political strife. Still, the scenery is both charming and quaint, like an old-fashioned watercolor postcard. The locals sport colorful, picturesque costumes, and collies, cows, and sheep wander about the rustic town.

The main attractions of the picture are Kelly and Charisse, two of Hollywood’s most attractive dancers. As the romantic leads, they get more screen time together than they had in Singin’ in the Rain two years before, and they are lovely to watch, especially in the yearning, balletic sequences. Charisse, dubbed as usual for the vocal performances, looks beautiful in Irene Sharaff’s costumes, but Kelly’s musical numbers don’t show off his singing ability as well as his other films. The most memorable musical segment of the movie is not one of the love duets but the more energetic ensemble piece, “I’ll Go Home with Bonnie Jean,” which features a number of the supporting players.