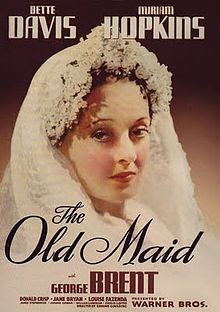 In 1938 Bette Davis had starred in Jezebel as a Southern belle whose unconventional behavior brought her misery and loneliness. In 1939, Davis and a number of her Jezebel cohorts returned for another Civil War love story in The Old Maid, in which Davis plays a Northern debutante whose unconventional behavior brings her misery and loneliness. Oddly enough, Charlotte Lovell in The Old Maid actually trespasses more seriously against convention than Jezebel Julie Marsden, even though Charlotte is presented as the more sympathetic and tragic of the pair. Directed by Edmund Goulding, The Old Maid is an emotional, star-studded melodrama, one that showcases Davis' talents for transformation and for making brittle, damaged heroines wring the hearts of their audiences.

The picture begins with Davis' Charlotte playing second fiddle to her cousin, Delia (Miriam Hopkins), who is about to be married to a wealthy young man who has everything Delia could want, except her heart. Delia's jilted lover, Clem Spender (George Brent), turns up just in time for the wedding, but Delia marries the other fellow anyway, leaving Charlotte to comfort Clem. Apparently, she comforts him all too effectively, since she later "goes out West" for a while and comes back with a baby whom she claims is a foundling. Clem never finds out because he dies on the battlefield, but Delia discovers the truth and prevents Charlotte from marrying into her husband's socially prominent family. Eventually, Delia incorporates Charlotte's daughter, Tina, into her own family, and the child does not know that bitter, strict "Aunt" Charlotte, the unloved old maid, is really her own mother.

Several of the Jezebel crew reunite for this outing. In addition to Davis, we have George Brent as the rakish lover, dying again, but this time in a Union uniform. Donald Crisp, who had played the kindly paternal doctor in the first film, appears as the kindly paternal doctor in this one, as well. Max Steiner, who was a very busy man throughout the classic era, returns as the composer. The parallels make The Old Maid almost a mirror image of Jezebel, with Rebels turned Yankee and the accents changed. Both films give Davis plenty of dramatic fuel, although she has more fun with her appearance in the later production, as Charlotte ages over the years and becomes somewhat like Davis' heroine in Now, Voyager (1942), only in reverse.

Like Jezebel, The Old Maid is very much a movie about clothing, with the wedding dresses of the two cousins and their daughters forming important focal pieces at different critical moments. We also see the changing fashions of the times as the years pass, encouraging us to contrast the freedoms of the younger generation, Tina (Jane Bryan) and Dee (Janet Shaw), with their mothers' more repressed youth. Charlotte, however, seems even more confined and restricted in her later wardrobe, sartorial evidence of her trapped life and the secret she keeps locked away.

Certainly the most interesting aspect of the film is the relationship between the two cousins. Do they really mean to hurt and torment one another so relentlessly? They take turns being antagonist and victim, driving sharp daggers into one another's backs and then wishing they could pull them out again. They really take the idea of the "frenemy" to a whole different level. Part of the chemistry between them stems from the fact that Davis and Hopkins hated each other. It explains why the cousins' cruelties seem so much more believable than their kindnesses. Davis was very good at this kind of toxic feminine codependence; it would serve her well in later movies like Whatever Happened to Baby Jane? (1962) and Hush... Hush, Sweet Charlotte (1964), where the relationships bubble over into Gothic horrors.

Sounds cheerful, right? It's worth knowing that the film was adapted from a play based on an Edith Wharton novel, The Mother's Recompense (1925). Given that origin, you can probably view the ending of The Old Maid as the happiest outcome possible. You’ll find more of Bette Davis and George Brent in Dark Victory (1939), The Great Lie (1941), and In This Our Life (1942). Miriam Hopkins earned an Oscar nomination for Best Actress in Becky Sharp (1935), but she also starred in Dr. Jekyll and Mr. Hyde (1931), Trouble in Paradise (1932), and Virginia City (1940). For more maternal melodrama, try Stella Dallas (1937), Kitty Foyle (1940), and Mildred Pierce (1945).

An earlier version of this review originally appeared on Examiner.com. The author retains all rights to this content.
Posted by Jennifer Garlen at 4:48 PM