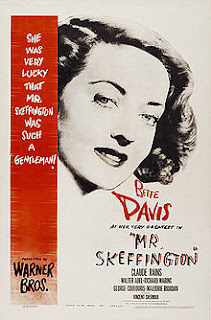 Despite its title, Mr. Skeffington (1944) is really a movie about Mrs. Skeffington, a focal shift that makes more sense when you know that the leading lady cast in that role is Bette Davis. Davis tends to dominate any picture in which she appears, and this one is no exception, even though the title character and presumed protagonist is played by the terrific Claude Rains. While Mr. Skeffington clocks in at an overwhelming two and a half hours and gives most of its attention to the shallow heroine rather than the long-suffering hero, the movie remains worth watching because of its performances and its engagement of issues as difficult and diverse as feminine narcissism, interfaith marriage, and anti-Semitism in the years leading up to World War II.

Based on the novel by Elizabeth, Mr. Skeffington follows thoughtless and selfish socialite Fanny Trellis as she delights in leading around a trail of admirers, both before and after her marriage to the wealthy Jewish businessman, Job Skeffington. Fanny marries Job for the benefit of her reckless brother, Trippy (Richard Waring), but her ungrateful sibling reacts to the marriage by running away to fight in World War I, where he inevitably gets killed. Despite the advice of her devoted cousin, George (Walter Abel), Fanny wrecks her marriage and her relationship with her daughter, continuing to play the coquette to a bevy of suitors until diphtheria ruins her celebrated beauty.

Like Heaven Can Wait (1943), Mr. Skeffington spans many decades in the lives of its characters, which requires some creative makeup and costuming, as Davis in particular changes dramatically over the course of time. In mere physical terms, Davis is not really beautiful enough to play the great charmer that Fanny is supposed to be; she lacks the luminous grace and perfect features of Gene Tierney or Ingrid Bergman, for example, but she makes up for it with her tremendous personality, flashing her famous eyes wide and carrying herself as if every movement were a pose calculated for the best effect. Even director Vincent Sherman felt that Davis' wrecked look at the end of the movie was probably overdone, but Davis wanted it that way, again angling for the greatest impact on her audience. She reveled in self-transformation in her pictures, but she ends up looking shockingly ghoulish in Mr. Skeffington, something like a combination of an aged Queen Elizabeth I and Baby Jane Hudson. I hope that Davis pushed the envelope so far only because she wanted to demonstrate that Fanny makes herself look worse by trying to cover up her changed face with the trappings of artificial beauty; would she be so terrible is she just gave up the false eyelashes and store bought curls and accepted her fate with grace?

Fanny's struggle against her own mortality makes a deeply flawed character more interesting, but it also highlights popular notions about women and aging in the early part of the 20th century. Like Norma Desmond in Sunset Boulevard (1950), Fanny is a relic at 50; her illness makes her look decrepit, almost embalmed in her own beauty products, but the other characters seem to think that this alteration is more a kind of poetic justice orchestrated by fate, that diphtheria has merely allowed the years to catch up with her at last. Mr. Skeffington might be a women's picture, but the attitude here is far from friendly toward women, particularly if the women in question refuse to look or act "their age," and Davis seems as determined as anyone to punish Fanny for her vanity and charm. These days we see women as vibrant and viable members of society well past the point where they would have been considered "old" before, and a movie like Mr. Skeffington ought to make any woman profoundly grateful for that change in the cultural climate. Certainly Fanny is annoyingly self-centered and shallow, but making her a mummy of herself in the early years of middle age seems unnecessarily sexist and cruel.

Ironically, Davis doesn't even appear in the movie's finest moment; Claude Rains delivers the film's most poignant and moving performance in a restaurant scene between Job and his adoring daughter. Struggling to explain the complications of an interfaith family and the rising tide of anti-Semitism in Europe, Rains' Job breaks the code of masculine restraint and sobs with his child; their embrace, so full of desperate love and raw emotional power, will reduce even the stiffest upper lip to trembling.

This review was originally posted on Examiner.com. The author retains all rights to this content.
Posted by Jennifer Garlen at 5:06 PM