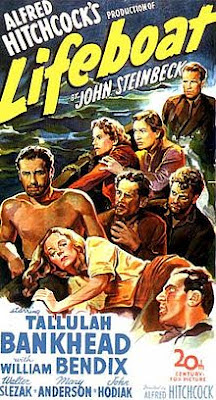 Based on a story by John Steinbeck, Alfred Hitchcock's tense wartime thriller, Lifeboat (1944), will induce claustrophobia in some viewers, as the entire film takes place within the confines of a single small boat. The ocean around might be wide, but the space on the boat is small, so small that the handful of survivors packed into it find themselves entirely too close for comfort, especially since one of them belonged to the German U boat that sank the ship on which the others were traveling. As with so many Hitchcock pictures, Lifeboat reveals the director turning the screws on his characters, constantly increasing their tension as he also increases the body count. It's a taut, gripping, psychologically complex film, one that addresses some of the most uncomfortable themes of its era, from ethnic prejudice and racism to class divisions and the brutal impulses of mob justice.

As the picture opens, we see the detritus of shipwreck floating across the screen, with a corpse inevitably closing the procession of debris. The survivors of the ship are quickly collected, beginning with the lifeboat's first occupant, journalist Constance Porter (Tallulah Bankhead). Joining Connie are members of the ship's crew, including alpha male Kovac (John Hodiak), mild Stanley "Sparks" (Hume Cronyn), injured Gus (William Bendix), and kindly Joe (Canada Lee). A wealthy businessman named Charles Rittenhouse (Henry Hull), a shell-shocked young mother (Heather Angel), and a lovelorn nurse (Mary Anderson) round out the Allied survivors, while the German Willi (Walter Slezak) turns up to make all of them anxious and conflicted about sharing the boat with their enemy.

All of the actors give fine performances, but Tallulah has the best lines, and she dominates the screen throughout the picture. We are set up to see her as the vessel's most interesting occupant from the start, when we find her sitting alone in the lifeboat, surrounded by her possessions, busily photographing the fallout of the disaster as if she herself were not endangered. Everything about her seems incongruous with this setting, from her mink coat and camera to her sparkling diamond bracelet. The other women, plucked from the oil-strewn sea, are bedraggled from the start, but Connie clings to her glamour and sexuality, and she manages to look good even when things seem to be at their worst, hoarding her store of lipstick the way the other characters cherish their water or rations.

I don't know that I like John Hodiak as Bankhead's sparring partner and love interest; he has plenty of prickly machismo, but he seems dangerous, unstable, a powder keg rather than a hero. There's something about his teeth that makes him look like a manticore, ready to eat the rest of the survivors alive if necessary. Hume Cronyn's gentle Sparks is by far the most appealing of the young men, and he is amply repaid for that amiability through a budding romance with Mary Anderson's character, Alice. William Bendix makes a sympathetic Gus, though doom seems to be written on his brow from the beginning, as he is the most nostalgic of the crew, and we all know that characters who look backward too much cannot have a future ahead of them.

All kinds of prejudice get an airing in this film, but the most striking, given the time period, might be that of race. The lone African-American survivor, Joe, is played with grace and dignity by Canada Lee. Apparently, Steinbeck felt that Hitch toned down the original story's engagement of race too much, but Lee's subtle reactions and measured comments eloquently convey the message to those who are willing to receive it. Only Joe will have the moral fortitude to resist the power of the mob when the critical moment arrives, and he is keenly aware that he and the German are connected by their shared status as "Other," even though he finds that connection an uncomfortable qualifier to his own patriotic sensibility. The German himself seems far less conscious of the possibility that he and Joe might be tied together in this way, and his ultimate role as villain undermines much of the sympathy we might otherwise have for him. His treatment of Gus, near the end of the film, merely vindicates our suspicion of him, leaving Joe as the far more complex anchor for the film's treatment of prejudice as a whole.

On a final note, you might wonder how Hitchcock manages his trademark cameo appearance in a film set entirely aboard a small, crowded boat. Be sure and have a good look at the ad on the back of the newspaper that one character holds up to read. He was a clever fellow, that Hitch! For more of Hitchcock’s films from this era, try Suspicion (1941), Shadow of a Doubt (1943), and Notorious (1946). Tallulah Bankhead, far more successful on the stage than in Hollywood, made few memorable films, but you can see her in Tarnished Lady (1931), The Cheat (1931), and A Royal Scandal (1945). Lifeboat was nominated for three Oscars, including a nod for Hitchcock as Best Director. It was one of five times that the director would be nominated for the award and not win.

An earlier version of this review originally appeared on Examiner.com. The author retains all rights to this content.
Posted by Jennifer Garlen at 8:36 PM