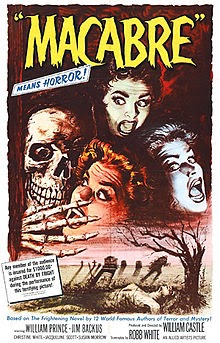 Macabre is less gimmick-driven than some of William Castle's later, more infamous shockers, despite the opening warning that audience members should alert the theater management if patrons suffer fear-induced medical emergencies. The title makes a similar overstatement of the thrills on offer, since most of the movie follows a weirdly subdued search for a child who has been abducted and buried alive. While Macabre comes up short on genuine scares, it does have that B-movie drive-in appeal that entertains the right kind of viewer in the right kind of mood, and it offers the additional attraction of familiar TV stars William Prince, Jim Backus, and Ellen Corby in very different roles.

William Prince stars as troubled doctor Rodney Barrett, whose practice has suffered after the deaths of his wife, Alice (Dorothy Morris), and her blind sister, Nancy (Christine White). Police chief Jim Tyloe (Jim Backus) and other townspeople blame Barrett in both cases, and someone apparently hates him enough to kidnap his young daughter and bury her alive. With the help of his lovestruck nurse, Polly (Jacqueline Scott), and his frail father-in-law (Philip Tonge), Barrett searches for the little girl in the hours before Nancy's funeral, but the situation is even more twisted and macabre than anyone suspects.

The closing credits beg viewers not to give away the surprise ending, which certainly does come as a shock, but the lead-in to that conclusion mostly falls flat, with Barrett and Polly wandering around town and poking half-heartedly at various sites where the missing child might be interred. They barely pick up their shovels before giving up each successive spot as a dead end, and their efforts lack any sense of urgency. The flashback sequences, which shed light on the lives and deaths of the Wetherby sisters, prove more interesting, especially the ones that reveal the love affair between Tyloe and the reckless Nancy. The closing credits indicate that Nancy and Tyloe were married, although the movie itself contradicts that, especially given Nancy's reaction to her pregnancy. Tyloe, Nancy, and Barrett himself are all depicted as fairly unlikable characters, with Barrett absent during his pregnant wife's fatal delivery because of his dalliance with an attractive friend. Polly and the dead Alice are more sympathetic, although both waste their affection on a man who clearly has issues with fidelity.

Those interested in classic film and television stars will find the casting of Macabre more interesting than the movie itself. Jim Backus, best remembered for Gilligan's Island and his voice work on Mister Magoo, is the most palpable presence as the hostile, threatening police chief. He's surprisingly convincing as a dominant male antagonist, throwing his weight around to bully Barrett and lusting after blind, bewitching Nancy. Ellen Corby, who has a supporting role as Barrett's childcare provider, is familiar to a generation of TV viewers as Grandma Walton, but she was also an Oscar-nominated film actress with roles in I Remember Mama (1948), Caged (1950), and dozens of other productions. William Prince worked mostly in television after an unremarkable film career; although less familiar to modern viewers, he did brief stints on many popular series and soap operas.