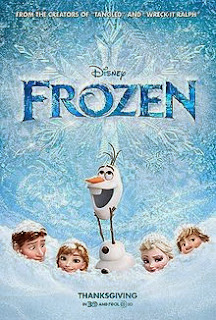 I admit it. I had written Frozen off because of the awful trailers. I wasn't even planning to see it, which is a huge statement given that I'm a lifelong Disney fan. Luckily, early reviews started begging folks to ignore the trailers and see the picture, anyway. If you're still on the fence about Frozen, let me join the chorus of reviewers urging you to see it. Despite what might be one of the worst marketing campaigns in Disney history, Frozen is a visual and narrative delight packed with fresh characters, great songs, and an ending that has been a long time coming for the princess set.

The story, more or less inspired by Hans Christian Andersen's fairy tale, The Snow Queen, revolves around two sisters. The elder, Elsa (Idina Menzel), was born with magical powers over ice and snow, although she struggles to control them. The younger, Anna (Kristen Bell), is a rambunctious, impulsive people person who doesn't understand why her beloved sister pulls away from her as they grow up. When Anna rushes into an engagement with Prince Hans (Santino Fontana), Elsa is so horrified that she loses control over her powers right in the middle of her own coronation ball, thus revealing to everyone the strange and dangerous ability that she possesses. Elsa flees, accidentally throwing the whole country into deep winter as she goes, and Anna pursues her in hopes of reconciling with her sister and ending the magical ice age. Along the way, Anna gets some help from the rustic Kristoff (Jonathan Groff), as well as a friendly reindeer, an enchanted snowman, and a family of trolls.

One thing that sets Frozen apart from other Disney princess stories is the focus on sisters. Yes, romance develops over the course of the story, but the relationship at the movie's heart is that between Elsa and Anna. That makes Frozen a thoughtful follow-up to Brave, which was about a young heroine's relationship with her mother. At long last, Disney is moving us away from narratives where women only have poisonous, competitive relationships with each other and the goal is to snag the prince and the throne. Elsa doesn't need a prince to be queen; in fact, she doesn't need anything except acceptance of herself and a repaired relationship with her sister. Anna does need romantic love, but her narrative arc also rejects the traditional Disney formula in some very surprising - and welcome - ways.

The voice actors really bring a lot to their characters without being celebrity distractions from them. Veronica Mars star Kristen Bell is a delightful, spunky presence as Anna, and it's great to hear her perform the character's musical numbers. Idina Menzel, however, really knocks it out of the park as Elsa, especially on the power house theme, "Let It Go." Her Broadway voice soars and raises the bar for every Disney heroine song that will come after this, so much so that I'm unclear why Disney felt the need to have Demi Lovato perform a single version for the picture's closing credits. As annoying as Olaf the snowman is in the trailers, he's actually very funny in the film, especially during his ironic musings on the nature of warmth and summer. Josh Gad, who provides Olaf's voice, does a fantastically funny job with "In Summer," which will make you laugh and wince at the same time. Santino Fontana and Jonathan Groff both have excellent voices for their characters, although the scene stealer of the picture is definitely Alan Tudyk as the Duke of Weselton.

The third act contains many shocks and twists, and I'll refrain from indulging in spoilers. I will say that Frozen is good enough and nuanced enough to be worth seeing even if you don't have children. Ignore the trailers, let go of what you think Disney princess movies are like, and make time to see Frozen while it's still in theaters. The excellent and very meta Mickey Mouse short that opens the movie is just the icing on a cold but delicious holiday treat.

Posted by Jennifer Garlen at 9:59 PM