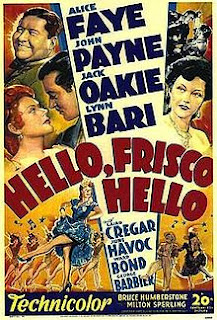 San Francisco’s Barbary Coast always makes for a colorful setting, and in Hello, Frisco, Hello (1943) Fox capitalizes on the opportunities that the backdrop presents for lavish costumes, lively stage numbers, and an anything goes ambience. This splashy Technicolor musical is primarily a showcase for the talents of Alice Faye, and it’s actually a remake of an earlier Faye picture, the 1936 musical drama, King of Burlesque. The 1943 film reunites Faye with King of Burlesque costar Jack Oakie, but it also brings in John Payne as the love interest and June Havoc as the female sidekick. Faye, however, is the main attraction throughout, and fans of the star will find her in top form, looking especially lovely in a dazzling array of period costumes. Directed by H. Bruce Humberstone, Hello, Frisco, Hello is also worth watching for the supporting performances from Oakie, Havoc, and Laird Cregar, as well as Faye’s rendition of the Oscar-winning song, “You’ll Never Know.”

Alice Faye stars as Trudy Evans, a gifted chanteuse whose voice brings success to Barbary Coast showman Johnny Cornell (John Payne) even though he takes her devotion to him for granted. When Johnny’s social ambitions lure him into the arms of Nob Hill heiress Bernice (Lynn Bari), the heartbroken Trudy departs for fame on the London stage. Johnny eventually regrets his union with the gold-digging Bernice, but his fall from the height of success leads him to drive away his old friends, including his vaudevillian comrades Dan (Jack Oakie) and Beulah (June Havoc). When Trudy returns to San Francisco, she must find a way to help Johnny without hurting his stubborn pride.

Faye has plenty of musical numbers to keep her busy, including the title song and “You’ll Never Know,” but she’s also very good at projecting Trudy’s unrequited love for the business-minded Johnny. Trudy is certainly something of a sap for mooning over a man who only uses her to get rich, but Faye has so much appeal that we’re inclined to forgive her heroine for her starry-eyed faith in someone who really doesn’t deserve her. As Johnny, John Payne mixes the smoldering intensity of Tyrone Power with the showbiz charisma of Don Ameche, although he’s not quite as memorable as either of those leading men, both of whom starred with Faye in other films. He’s best in the darker segments of Johnny’s narrative, especially with Lynn Bari as the seductive socialite who fascinates him with her high class charms.

The supporting cast provides comedy to lighten the rest of the narrative’s sentimental drama. Jack Oakie is particularly fun as Johnny’s sidekick, Dan, and he gets several great stage numbers that show off his vaudevillian style as a comic song and dance man. June Havoc keeps up with the energetic Oakie as his performing partner; although she’s usually playing second fiddle to Faye in the production numbers, she and Oakie really shine in a sailor-themed segment late in the film, and Havoc shows both the spunk and the legs that one might expect from the sister of Gypsy Rose Lee. Laird Cregar has a small but memorable role as the bearded gold prospector Sam Weaver; although he was usually cast as a villain, Cregar proves yet again that he was equally capable of tackling comedic roles, and he gives his bit character a wonderfully Falstaffian quality.