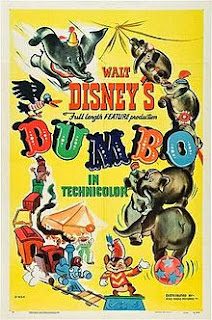 Disney classics are probably the one group of “old” movies that many people see even if they aren’t particularly enthusiastic about film. After all, these movies surround us throughout our lives, thanks in part to relentless Disney marketing. They inspire theme park rides and countless toys, harried parents trot them out to entertain moody toddlers, and they have become such a part of American childhood that you’d worry about a kid who doesn’t know who Dumbo is. With familiarity, however, comes apathy, if not actual contempt. We might easily take a movie like Dumbo for granted, especially because even the very youngest viewers seem attracted to it, but this 1941 animated feature can speak just as eloquently to a thoughtful adult who is willing to give it some time and attention.

You probably know the story. Dumbo is a baby elephant born into the circus, where his oversized ears become a source of embarrassment and endless abuse. As much as his mother loves him, she cannot protect him from the cruelty of others, and eventually she winds up imprisoned. Poor Dumbo, alone and frightened, has to find his own place in the circus, but he gets some help from a tiny mouse named Timothy and a flock of friendly crows. When Dumbo finally discovers his talents, he’s ready to confront those who mistreated him and take pride in his unique identity.

It seems like a simple story, and it is simply told, but there’s a lot of heartbreak and soul-searching in Dumbo. Anyone who has ever been teased or bullied will recognize the psychological damage that Dumbo endures. His mother’s peers criticize and reject him, the circus patrons mock and provoke him, and the clowns assume that nothing they do to him matters because “elephants ain’t got no feelings.” Dumbo is the individual as outcast, the lonely soul cast adrift on a cold sea. Neither his innocence nor his youth protect him. Difference marks him as the object of scorn and derision, and thus the little elephant stands in for all of the oppressed. His moment of terror and sacrifice, high on the burning circus platform, might as well be a crucifixion.

Think that’s reading too much into a children’s film? Look at Dumbo’s cinematic peers. Like Charlie Chaplin’s Little Tramp, he is a silent everyman, sweet-natured but suffering. Compare him to the iconic martyr in The Passion of Joan of Arc (1928); clown makeup takes the place of shorn hair and a straw crown. Despite his appeal to preschoolers, Dumbo is a deep character, embodying existential and spiritual questions of the most profound nature. His happy ending is hard won, and maybe even at odds with his essence, but that’s the one place where the story defers to its audience’s desire for poetic justice. Before that triumphant finale, Dumbo will break your heart, and that’s what makes it such a powerful and enduring film.

Forgive the stereotyped crows (at least they sing well), and listen for Disney voice regulars Sterling Holloway and Verna Felton as Mr. Stork and the elephant matriarch. Dumbo won an Oscar for Best Musical Score, and it should have won Best Original Song for “Baby Mine,” which could wring sentimental tears from a turnip. For more circus stories, see Chaplin’s The Circus (1928), the Marx Brothers’ At the Circus (1939), The Greatest Show on Earth (1952), and Jumbo (1962).
Posted by Jennifer Garlen at 7:28 PM