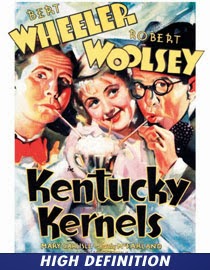 Wheeler and Woolsey are not as familiar today as some of classic comedy’s other leading teams, but they have plenty to offer to fans of The Marx Brothers, Abbott and Costello, and Laurel and Hardy in terms of loaded lines, nutty plots, and goofy sight gags. Kentucky Kernels (1934) comes from the second half of their career, with George Stevens working as their director, and it makes a perfectly serviceable introduction to the duo’s comedic style, even if it suffers from the dated images of the South that one might expect from a picture with such a title. Along with supporting performances from Mary Carlisle, Noah Beery, and Margaret Dumont, Kentucky Kernels offers additional appeal in the adorably destructive form of child star Spanky McFarland, best remembered today for his recurring role in the Our Gang series of shorts.

Our story opens with Jerry Bronson (Paul Page) trying to commit suicide but being saved by down and out magicians Elmer (Robert Woolsey) and Willie (Bert Wheeler). They convince Bronson to adopt an orphan to cheer himself up, but Elmer and Willie quickly find themselves in charge of the tyke when Bronson elopes. After lawyers pronounce the newly adopted Spanky Milford (Spanky McFarland) heir to a vast Kentucky estate, Elmer and Willie escort him to his inheritance, unaware that the property lies in the middle of an ongoing feud between the Milfords and the Wakefields.

There’s a fair bit of set up before our boys arrive in Kentucky, but that’s where the action really gets going. Much of the “local color” depends on regional and racial stereotypes, some of which are more problematic than others. Wheeler and Woolsey strut around in long coats putting on some ridiculously affected Southern airs, as if their only idea of the South has come directly from equally stereotypical motion pictures, but Noah Beery’s Colonel Wakefield does nothing to dispel the image of the old Southern patriarch. Mary Carlisle, as the Colonel’s daughter, Gloria, makes a pretty love interest for Wheeler’s tender-hearted Willie, although her accent is seriously overdone. Lucille La Verne, a Nashville native, does greater justice to Southern womanhood as Aunt Hannah, who turns out to be one of the most compelling characters in the whole movie. The thorniest element of the picture is certainly Willie Best as the egregiously racist character, Buckshot; Best is credited for the role as “Sleep ‘n’ Eat,” a name he used for several of his earlier films. As successful as Best might have been with the Stepin Fetchit style in the 1930s, it’s almost impossible for viewers to laugh at it today.

Despite these problems, there’s still plenty of funny stuff going on in Kentucky Kernels. The opening gag, with Willie and Elmer arguing like a married couple, is ripe with subversive humor. Willie’s later turn in drag comes as no surprise after that introduction, although he ironically also plays the Romeo to Gloria’s drawling Juliet. Spanky’s penchant for breaking anything made of glass provides an ongoing opportunity for comic mischief, and Elmer’s magic tricks set up several good jokes, as well. The song number that dominates the middle act might go on too long for some viewers’ tastes, but you have to appreciate the increasing absurdity of the auditors, especially when Woolsey sings the romantic ditty to the long-eared object of his affection. There’s also an amusing sequence with a drunk horse and a strangely bifurcated carriage, and the finale boasts a wild siege at the Milford estate with Spanky creatively indulging his destructive appetite to his heart’s content.

Be sure to appreciate Marx Brothers regular Margaret Dumont in a small role as the head of the orphanage. For more from Wheeler and Woolsey, try Caught Plastered (1931), Diplomaniacs (1933), and Hips, Hips, Hooray! (1934). Spanky McFarland takes the title role in General Spanky (1936), while Mary Carlisle also appears in Dance, Girl, Dance (1940). You’ll find Noah Beery, the brother of Wallace, in The Mark of Zorro (1920), She Done Him Wrong (1933), and Wheeler and Woolsey’s Cockeyed Cavaliers (1934). Lucille La Verne appeared in numerous silent films, including Orphans of the Storm (1921), but if you close your eyes you might also recognize her as the voice of the evil Queen in Snow White and the Seven Dwarfs (1937). See more of George Steven's directorial work from the 1930s in Annie Oakley (1935), Swing Time (1936), and Gunga Din (1939).

You'll find Kentucky Kernels available for streaming on Warner Archive Instant. Other Wheeler and Woolsey films currently on the Warner site include Diplomaniacs (1933) and On Again - Off Again (1937).

Posted by Jennifer Garlen at 3:12 PM