Classic Films in Focus: THE FLAME AND THE ARROW (1950) 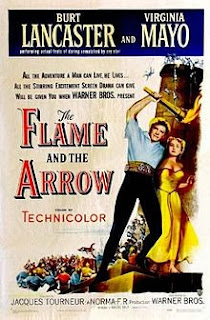 All of the classic swashbuckling stars had good looks and charm, but few, if any, could rival Burt Lancaster for sheer physical prowess. Lancaster earned his Oscar nominations and Best Actor win for dramas, but early in his career he put his background as a circus acrobat to good use in a handful of high adventures, including the 1950 Technicolor spectacle, The Flame and the Arrow. Directed by Jacques Tourneur and costarring Virginia Mayo, as well as Lancaster’s childhood friend Nick Cravat, this old school swashbuckler takes many of its cues from The Adventures of Robin Hood (1938). The main attraction, however, is the acrobatic skill of Lancaster and Cravat, who perform a dizzying array of jumps, stunts, and circus tricks as they attempt to save medieval Lombardy from its Hessian overlords.

Lancaster plays the free spirited Dardo, who has been left to raise his son, Rudi (Gordon Gebert), by himself after the defection of his wife, Francesca (Lynn Baggett). When his wife returns to Lombardy with her Hessian lover, Count Ulrich (Frank Allenby), Dardo gets himself and his friends into trouble by showing his contempt for the powerful lord, who seizes Rudi in retaliation. Dardo then leads his men in an effort to overthrow the Hessian oppressors and reclaim his kidnapped son, but his actions bring him unexpected company in the form of Ulrich’s lovely niece, Anne (Virginia Mayo).

Tall and powerfully built, Lancaster certainly looks good in tights, and he performs acrobatic feats almost casually, making them seem deceptively easy. The movie benefits from Lancaster’s skill in action scenes that would normally have to hide a stunt double’s face, and the camera stays close to assure us that Lancaster is, indeed, the heroic figure executing those jumps and swings. Nick Cravat makes a perfect foil to his friend and partner; short, funny, and mute because of his heavy New York accent, he plays a sort of swashbuckling Harpo Marx to Lancaster’s Lombard Robin. The two really get to show off their skills in the climax, when the Lombard rebels infiltrate the castle disguised as members of a traveling circus.

The supporting cast boasts fewer famous faces than the 1938 Robin Hood film, although its characters tend to fill the same functions. Frank Allenby is credibly snide as the Hessian count known as “the Hawk,” and Robert Douglas oozes moral ambivalence as the self-interested Marchese. Child actor Gordon Gebert has a few good scenes as Rudi, although a little of him goes a long way, while Lynn Baggett’s role as faithless Francesca could be more robust. Norman Lloyd proves something of a scene stealer as the wry Apollo, a minor character who obviously stands in for Sherwood’s Alan-a-Dale. Dardo’s Maid Marian is charmingly played by Virginia Mayo, who brings plenty of energy and a pair of well-displayed legs to her role as Anne of Hesse. While she appears in several stunning gowns requisite for this kind of historical pageant, Mayo looks best in the boyish costumes she adopts when riding or being held prisoner in the forest. Her experience as a bad girl in films like White Heat (1949) also gives her an edge in playing the scenes where she attempts to manipulate the Marchese and Dardo; we’re not always sure which side she’s really on, and that makes her character more interesting.

The Flame and the Arrow earned two Oscar nominations, one for Best Color Cinematography and one for Max Steiner’s score. Lancaster won his only Oscar of four Best Actor nominations for Elmer Gantry (1960). See more of Lancaster and Cravat’s acrobatics in The Crimson Pirate (1952), but don’t miss Lancaster in Gunfight at the O.K. Corral (1957), Sweet Smell of Success (1957), and The Professionals (1966). Virginia Mayo also stars in The Best Years of Our Lives (1946), and you'll find Gordon Gebert in Holiday Affair (1949) and The House on Telegraph Hill (1951). For more from director Jacques Tourneur, see Cat People (1942), Out of the Past (1947), and Night of the Demon (1957). For even more swashbuckling action, try Captain Blood (1935), The Mark of Zorro (1940), and The Three Musketeers (1948).

The Flame and the Arrow is currently available for streaming on Warner Archive Instant.
Posted by Jennifer Garlen at 9:53 AM