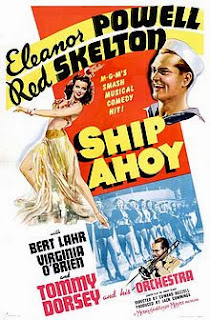 It’s a sad fact that Eleanor Powell isn’t nearly as familiar today as she ought to be, even though male peers like Fred Astaire and Gene Kelly have become reigning icons in the classic movie pantheon. Like those more famous stars, Powell is a terrific dancer, leaping exuberantly in numbers that highlight both her figure and her technique, and she’s clearly the star of her own show. You can see plenty of Powell’s talent on display in Ship Ahoy (1942), a relatively modest wartime musical that pairs the elegant star with funny man Red Skelton as a bumbling hack writer who falls for Powell - literally - during an ocean cruise. Ship Ahoy doesn’t pretend to compete with Singin’ in the Rain (1952) or Top Hat (1935), but it does offer laughs, a fun supporting cast, and some really energetic performances from Powell to reward viewers for their attention.

The spy plot is unashamedly thin and implausible, taken as it is from one of Merton’s own serials. It does give Red Skelton the chance to do quite a few pratfalls and even play hero a bit, although of course his efforts don’t work out the way he would like. Skelton and Lahr make an oddly amusing comedic pair, both of them pulling crazy faces and having particular fun with a drunk scene inside a well-stocked ship’s hold. Skelton is also appealing enough as a leading man; we like him and want to see him win Tallulah in spite of his clumsy antics. Lahr, on the other hand, seems like the short end of the stick for Virginia O’Brien’s character, since he’s not only older and homely but also an incorrigible skirt chaser.

The comedy shtick winds around the musical numbers, and these are really the reason to see the picture. Powell performs each with tremendous energy, although the best might be the poolside sequence for “I’ll Take Tallulah,” which includes some very sharp drumstick tricks. The matador dance is also a highlight, and it certainly shows off Powell’s impressive legs. Tommy Dorsey’s band gives Powell swinging backup throughout, and you’ll even find Frank Sinatra singing two tunes. Sinatra’s version of “Poor You” gets a typically nutty twist from Virginia O’Brien, which is always fun, and Ship Ahoy might actually be one of the better places to see O’Brien, who made a lot fewer movies than she should have.

Ship Ahoy is currently available for streaming on Warner Archive Instant, along with several other Red Skelton films and a handful of movies featuring Eleanor Powell.
Posted by Jennifer Garlen at 10:25 PM