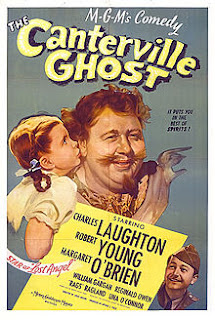 It's surprising how many times Oscar Wilde's story, "The Canterville Ghost," has been adapted for the screen, although most of the productions have been for television rather than film. The supernatural title character has been played by John Gielgud and Patrick Stewart, among others, but the 1944 theatrical release, starring Charles Laughton, is the classic rendition. Although its World War II setting immediately reveals its broad deviation from Wilde's original, The Canterville Ghost is worth watching because of Laughton's terrific tragicomic performance and the presence of noteworthy classic stars like Robert Young and Margaret O'Brien, as well as spirited direction from Jules Dassin.

Laughton plays Sir Simon de Canterville, a 17th century nobleman whose own father (Reginald Owen) walls him up alive in the family castle for dishonoring the Canterville name with his cowardice. Three centuries later, Sir Simon has become the most terrifying ghost in England, with a long trail of horror stories adding to his fame, and the castle's present owner, six year old Lady Jessica (Margaret O'Brien), lives in fear of him. The ghost's reputation is ruined, however, when a rowdy group of American Rangers takes up residence in the castle and turns the tables on him. As it turns out, one of the Americans, Cuffy Williams (Robert Young), is actually a descendant of the Canterville line, making him Sir Simon's best hope for breaking the curse that has held him on earth for so many years.

The story mixes fantasy with wartime themes of courage under fire and self-sacrifice, the very qualities that Sir Simon originally lacks and that Cuffy - and Jessica - must find within themselves. The special effects for the ghostly manifestations are entertaining but not terribly scary; they have the same sense of fun as Disney's Haunted Mansion and are unlikely to frighten even the youngest modern viewers. Laughton, however, looks fantastic in each of the ghost's ludicrous disguises and fully milks each opportunity for humor laced with pathos. Portly, in puffy period garb, and sporting an improbable set of whiskers, Laughton makes Sir Simon both a buffoon and a truly tragic figure, lonely and weary after his long centuries of immortal exile. The movie's most terrible scene is certainly the moment when Sir Simon's father condemns him to a slow, nightmarish death, ironically within the heart of the very home that renounces him.

Robert Young and Margaret O'Brien mostly supply reactions to Sir Simon's antics, but Young exudes the appropriately sturdy charm of the American soldier, and O'Brien is wide-eyed and effectively cute as Lady Jessica. The Canterville Ghost came out right in the middle of O'Brien's most productive period, between Jane Eyre (1943) and Meet Me in St. Louis (1944). She was a major child star in the 1940s, and little girls who like Shirley Temple ought to enjoy O'Brien, as well, even if she doesn't sing and dance. Una O'Connor doesn't get enough screen time as the housekeeper to provide her trademark hysteria in response to the ghost's manifestations, but classic movie fans will be glad to see her as well as Mike Mazurki and Frank Faylen among the supporting cast.

The Canterville Ghost makes a very good choice for a family film, especially for kids who enjoy ghost stories and fantasies. Try a double feature with Blackbeard's Ghost (1968) for a night of kid-friendly thrills, or follow it with Topper (1937) and I Married a Witch (1942) for more classic supernatural comedy. Charles Laughton won the Oscar for Best Actor in The Private Life of Henry VIII (1933), but he also stars in Island of Lost Souls (1932), Ruggles of Red Gap (1933), and Witness for the Prosecution (1957). Actually, Laughton is brilliant in almost every movie he did, and once you start watching him it's hard to stop. Don't miss his sole directorial turn in The Night of the Hunter (1955). Robert Young also stars with Margaret O'Brien in Journey for Margaret (1942), and you'll find him with Shirley Temple in Stowaway (1936).  For Young's darker films, try They Won't Believe Me (1947) and Crossfire (1947). He went on to television fame in Father Knows Best (1954-1960).
Posted by Jennifer Garlen at 10:56 PM