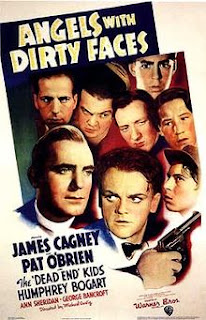 The early 30s were the heyday of gangster pictures, with movies like The Public Enemy (1931) and Scarface (1932) heating up the screen. By the end of the decade the moral arbiters had become alarmed about gangster movies being a bad influence on the kids in the audience; therefore, pictures that featured gangster characters were supposed to show that the bad guys would always get their comeuppance in the end. Of course, the gangsters had died in the earlier movies, too, but they had always gone out with a bang. Director Michael Curtiz's Angels with Dirty Faces (1938) pays some lip service to moral rectitude in its juxtaposition of James Cagney's doomed criminal with Pat O'Brien's saintly priest; certainly, its shocking finale seems to support the attempt to strip crime of its glamor, but ultimately it undermines its own ending to give us yet another example of Cagney's brilliance at playing the seductive thug.

Cagney stars as Rocky Sullivan, who learns to become a career criminal in juvenile hall after getting caught in a youthful crime. His pal and accomplice, Jerry Connolly (Pat O'Brien), outran the cops that fateful day and grows up to be a Catholic priest in the same poor neighborhood where he and Rocky were kids. When Rocky gets out of his most recent stint in prison, he reunites with Jerry while horning his way into some crooked business schemes managed by his underhanded lawyer, James Frazier (Humphrey Bogart), and cohort Mac Keefer (George Bancroft). Jerry wants to save Rocky, but even more he wants to save the neighborhood kids from following Rocky's example, and when Rocky gets caught for the last time Jerry asks him to make a terrible sacrifice for the boys' benefit.

Cagney's appeal as Rocky is tremendous, and Pat O'Brien really doesn't have a chance against him with the audience's sympathies. The two of them are like those cartoons of the Faustian angel and devil on somebody's shoulders, and the angel is always the most obnoxious bore. It's easy enough to see that we're supposed to like Jerry Connolly better and that he obviously occupies the moral high ground, but Rocky is more fun every step of the way, and in the end Rocky even turns out to be the better man since the scope of his sacrifice is far beyond anything that Father Jerry will ever be asked to do. I side with the opinion that Rocky's final performance in the gas chamber is just that, although some people insist that it's meant to be ambiguous. The Dead End Kids might buy Father Jerry's story that Rocky went out yellow, but the audience, I think, is meant to know a wink at the Hays Code when they see one.

The supporting cast gives the movie additional depth and character. Ann Sheridan has great appeal as Rocky's love interest, and Bogart exudes sweaty cowardice as the two-timing lawyer. The Dead End Kids run amok like gritty boy versions of the cast of Annie; they had started out on Broadway in Dead End and come to Hollywood as a package deal; their first film appearance was a 1937 screen adaptation of the play, but they proved popular with audiences and made several subsequent films. Take time to appreciate Frankie Burke, the actor who plays Rocky as a boy; he really does a great job capturing the persona of a youthful Cagney.

Angels with Dirty Faces picked up three Oscar nominations, including nominations for Cagney and Curtiz, but it went home empty-handed. Cagney would eventually win his only Oscar for a very different role in Yankee Doodle Dandy (1942). For more of Cagney's great gangsters, see The Public Enemy (1931) and White Heat (1949). Bogart plays more bad guys in The Petrified Forest (1936) and The Treasure of the Sierra Madre (1948). For a change of pace, try one of Michael Curtiz's other 1938 films, The Adventures of Robin Hood. Curtiz actually earned two nominations for Best Director in 1939, one for Angels and one for the Claude Rains drama, Four Daughters (1938); even though he lost to Frank Capra for You Can't Take It with You (1938), that's still an impressive accomplishment. He would win the Oscar a few years later for directing the immortal Casablanca (1942).

An earlier version of this review originally appeared on Examiner.com. The author retains all rights to this content.
Posted by Jennifer Garlen at 9:47 AM