Classic Films in Focus: THE STRANGE LOVE OF MARTHA IVERS (1946) 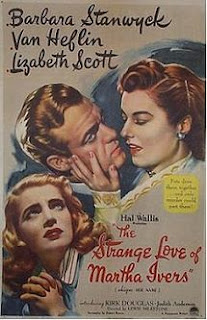 Lewis Milestone's 1946 noir thriller, The Strange Love of Martha Ivers, merits attention for a number of reasons, including another excellent femme fatale performance from Double Indemnity (1944) star Barbara Stanwyck. A story of murder, money, and carefully guarded power, the film presents a fascinating commentary on the ways in which early experiences shape personality and determine destiny, either for good or evil. It also offers an outstanding cast in addition to Stanwyck, including Van Heflin, Lizabeth Scott, Kirk Douglas, and Judith Anderson, all of them in top form as the familiar types of the genre.

Stanwyck plays the adult incarnation of Martha Ivers, a character we first meet as a young girl (played by Janis Wilson). Young Martha's fatal argument with her tyrannical aunt (Judith Anderson) sets the wheel of fortune in motion, bringing freedom and power to Martha but also binding her to the few people who might know what really happened that night. Once grown, she marries Walter (Kirk Douglas), the son of her aunt's chief sycophant, and pushes him into politics and the law. The unexpected return of another childhood companion, Sam (Van Heflin), seems to threaten Martha and Walter's long protection of their dark secrets, and the couple will stop at nothing to ensure his silence, even using his newfound love interest, Toni (Lizabeth Scott), as a pawn in their deadly game.

Martha is one of Stanwyck's steeliest and most deranged characters, and those qualities are established by Janis Wilson's performance before Stanwyck even takes over the role. She needs desperately, and because of that she draws both Walter and Sam to her, although in Walter's case her embrace quickly becomes a death grip. Walter and Martha make for a spectacularly dysfunctional couple, fighting, plotting, and hating each other but bound together in a Wuthering Heights kind of codependency. Countering their mad marriage we have Sam's developing relationship with Toni, a hard luck angel who serves as a foil to Stanwyck's spoiled succubus. The audience sees right away that Toni is the right girl for Sam, but Martha's siren appeal confuses him and draws him in, despite the fact that Sam has been around enough that he ought to know better.

The Strange Love of Martha Ivers is also noteworthy because Walter is Kirk Douglas' very first screen role, and he springs fully-formed from the head of Hollywood, holding his own against the well-established Stanwyck, who was nine years his senior and had been in movies for nearly two decades in 1946. Douglas plays Walter as a tragically mixed bag of weakness and good intentions, and his drunk scenes are some of his best moments in the film. His good looks and strong chin suggest that Walter might have been a better man if not for his opportunistic father and dangerous, demanding wife, but he loves Martha in spite of her rotten heart. He can drink himself into a stupor, but he can never leave her, and she knows it all too well. The ending of the movie brings their relationship to a shocking, but perfectly realized, close, with a scene that embodies everything we love about classic noir.

See more of young Kirk Douglas in Out of the Past (1947), his next film and another great example of film noir. Director Lewis Milestone earned the Oscar for Best Director for his work on All Quiet on the Western Front (1930), but he also directed Of Mice and Men (1939) and the original Ocean's 11 (1960). Judith Anderson is best remembered today as Mrs. Danvers in Rebecca (1940), while Van Heflin is probably best known for Shane (1953) and 3:10 to Yuma (1957), although he won a Best Supporting Actor Oscar for Johnny Eager (1941). See more of Lizabeth Scott in Dead Reckoning (1947) with Humphrey Bogart. For a different side of Stanwyck, try Stella Dallas (1937 and The Lady Eve (1941.)

The Strange Love of Martha Ivers is now in the public domain, which means you can see it for free on almost any streaming service, but it looks much better if you can find a high quality print, especially with the stormy scenes early in the film.
Posted by Jennifer Garlen at 10:50 AM