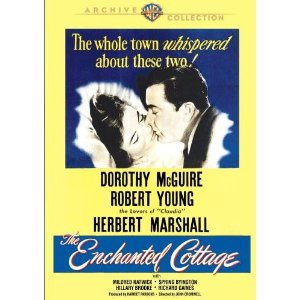 Few romantic movies could be more tenderly affecting than John Cromwell's sentimental drama, The Enchanted Cottage (1945), which stars Dorothy McGuire and Robert Young as imperfect people who find an unlikely love affair awaiting them in a small seaside house. This might, in fact, be the perfect classic film for Valentine's Day, especially for those who want love to come to everyone, not just the beautiful and the fair. This sweet story, with moving performances from Herbert Marshall and Mildred Natwick as well as the leading couple, is exactly the sort of thing to watch with the love of your life, or at least with a pint of ice cream and a box of tissues at hand.

Robert Young stars as Oliver Bradford, whose original wedding plans fall apart after he's maimed and scarred in the war. Hoping to hide from his former fiancee (Hillary Brooke) and his flighty mother (Spring Byington), Oliver takes up residence in the little cottage where he had intended to spend his honeymoon. There he encounters Laura Pennington (Dorothy McGuire), a plain, kindly girl who doesn't seem to mind his injured looks. Oliver marries Laura without any real romantic feelings about her, but something magical happens to the pair after their wedding day.

It's true that The Enchanted Cottage treads lightly where the protagonists' appearances are concerned, but the story suggests their flaws more than it actually shows them. Without makeup and carefully styled hair, in ill-fitting everyday clothes, Dorothy McGuire simply looks like a normal person instead of a movie star, but the transformation scenes still work to great effect. Robert Young's injury makeup includes some scarring around one side of his face, which he accentuates with a useless arm, but he's much easier to look at than, say, The Phantom of the Opera (1925) or The Man Who Laughs (1928), and probably even less scarred than Joan Crawford in A Woman's Face (1941). Both McGuire and Young work hard to sell their characters' self-images as flawed, McGuire with timidity and sadness, and Young with bitterness and despair. We are meant to feel for and with them, and the film succeeds in making that happen.

The love story is presented with a brief frame tale featuring Herbert Marshall as the blind composer, Major John Hillgrove, who befriends both Oliver and Laura and functions as a sort of perfect witness to their early sufferings and eventual happiness. Hillgrove sympathizes with Oliver's despair over his war wounds, having been blinded in the previous war, and it's worth noting that the actor had a special understanding of the role, as he had in fact lost a leg in World War I. Marshall is so good with his artificial leg that you can spend the whole movie fruitlessly looking for any sign of it, but his personal history lends additional pathos to the scene in which the two injured men speak of their feelings and reveal the individual costs of war. Mildred Natwick provides another counterpoint to the young lovers as the widowed owner of the cottage; her relationship with Laura is subtle but effective, and she has several brief but moving scenes that ought to go straight to the heart of any sensitive viewer.

The Enchanted Cottage earned an Oscar nomination for Best Musical Score, and music plays an essential part in the story. The composer, Roy Webb, would collect seven Oscar nominations in all but never win, which is a shame when one considers that his other work includes Cat People (1942), Notorious (1946), and Out of the Past (1947). For more of Dorothy McGuire, see The Spiral Staircase (1945) and Gentleman's Agreement (1947). You'll find Robert Young in The Canterville Ghost (1944) and Crossfire (1947), although he's best remembered today for his later television roles on Father Knows Best and Marcus Welby, MD. See Herbert Marshall in Trouble in Paradise (1932), Foreign Correspondent (1940), and The Letter (1940), and catch Mildred Natwick in She Wore a Yellow Ribbon (1949), The Quiet Man (1952), and The Court Jester (1955). Spring Byington plays much less irritating mothers in You Can't Take It with You (1938) and The Blue Bird (1940), but I also enjoy her crazed housekeeper performance in Dragonwyck (1946).

The Enchanted Cottage is available on DVD from Warner Archive, but you cannot currently rent it on Netflix.
Posted by Jennifer Garlen at 11:20 PM