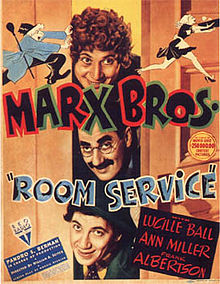 There are several truly brilliant Marx Brothers films, including Duck Soup (1933) and A Night at the Opera (1935), but Room Service (1938), directed by William A. Seiter, offers little to compare with them. It's a shame, too, because in addition to the brothers we get Lucille Ball and a very young Ann Miller along for the ride, and a combination like that ought to be a winner when it comes to comedic opportunities. If the opportunities are there, however, the movie fails to make the most of them, and Room Service ends up among the weakest of the Marx Brothers outings.

The plot of Room Service is relatively straightforward. Groucho plays theater producer Gordon Miller, who is struggling to get funding for his play while he and his actors crash the hotel of Gordon's brother-in-law. The hotel brass want the actors thrown out, but the ragtag group uses a variety of zany ruses to avoid getting the boot until the play can open.

Because this picture is not an original Marx Brothers story - it was adapted from a stage play - several of the usual elements of a Marx Brothers movie are notably absent, including the wonderful musical solos by Chico and Harpo. Groucho seems subdued; his usual barbed patter must give way to the scripted material, and he's left duck-walking around the hotel room without enough to do. The story might be funny enough if it were not trying to be a Marx Brothers film, but their presence creates expectations that go unfilled. Lucille Ball plays it more or less straight, Ann Miller is underused, and the funniest guy in the whole movie turns out to be Frank Albertson as the inexperienced young playwright, Leo Davis. Classic movie fans will most likely recognize Albertson as the braying Sam Wainwright in It's a Wonderful Life (1946), but his career included more than 180 film and television appearances.

If you are new to the Marx Brothers, start with one of their best films instead; A Day at the Races (1937) makes an excellent first outing, especially if you are watching with kids. After that, try A Night in Casablanca (1946) or even At the Circus (1939), which at least offers the attraction of Groucho singing "Lydia, the Tattooed Lady" to make it worthwhile. See more of Lucille Ball's earlier work in Dance, Girl, Dance (1940) and Lured (1947). Ann Miller, who was only 15 when she made this film and You Can't Take It with You (1938), would go on to star in classics like On the Town (1949) and Kiss Me Kate (1953). Director William A. Seiter, a veteran of silent films and musical comedies, also oversaw several Shirley Temple pictures, including Stowaway (1936), which actually makes for a better example of his work than Room Service.

An earlier version of this review originally appeared on Examiner.com. The author retains all rights to this content.
Posted by Jennifer Garlen at 11:35 AM