The Palace Cinema: A LEGO Set for Serious Cinephiles 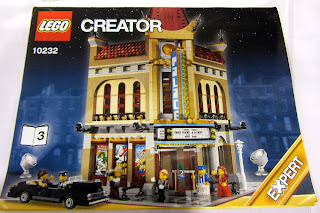 It's not everyday that my two greatest obsessions - classic movies and LEGO - overlap, but when they do the results are fantastic. The official unveiling of the upcoming Palace Cinema set took place at BrickFair AL in Birmingham, Alabama, on January 19, 2013, and I was there to drool all over the display model. It's a great set, and one that I think general classic movie fans might well find as irresistible as those of us already involved in the LEGO hobby.

This is a huge Creator set designed to work with the previous Cafe Corner modular kits, and all of those have been terrific, but the classic theater design really sets this latest installment above and beyond. As film fans will immediately note, it takes its architectural cues from that Mecca of the movies, Grauman's Chinese Theatre in Hollywood. The movie posters on the outside feature in-jokes for adult LEGO hobbyists but also evoke classic Hollywood style, and the set even has stars on the sidewalk outside the entrance and minifigures to stage a classic Hollywood gala premiere. 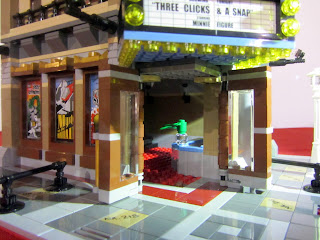 The Palace Cinema will go on sale at LEGO stores and other retailers in March 2013. List price will be about $150. If you're planning to stage a red carpet event with yours, be sure you get the Marilyn Monroe inspired collectable minifigure in the new Series 9 figure collection. She costs about $3 retail and will add the perfect starlet sex appeal to the scene!

If you'd like to see more photos of the Palace Cinema set and the huge LEGO displays at BrickFair 2013, head over to the Virtual Virago photostream on Flickr!


Posted by Jennifer Garlen at 8:22 PM