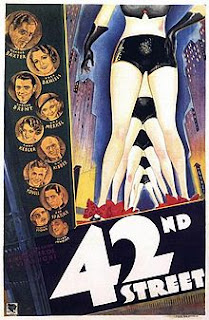 In the Depression Era, frothy, upbeat musicals were a much appreciated form of relief, and nobody made musicals any frothier or more upbeat than choreographer Busby Berkeley, who didn't actually direct the films but rather constructed elaborate, show-stopping musical numbers around which the directors filled in the gaps. Of the Busby Berkeley films, 42nd Street (1933) is the best known, partly because of visually dazzling musical interludes like "Shuffle Off to Buffalo" and partly because director Lloyd Bacon's surrounding story is the ultimate backstage theater tale that so many later films have imitated, parodied, and revised.

The picture features Berkeley regulars Dick Powell and Ruby Keeler as two of the performers in a troubled stage musical being produced by the brilliant but dangerously overworked Julian Marsh (Warner Baxter). Powell plays Billy, one of the principal performers, while Keeler is Peggy, a nervous first timer. After a couple of more experienced chorus girls (Ginger Rogers and Una Merkel) help Peggy get a spot in the show, she finds out just how demanding life on the stage can be. Meanwhile, the show's star, Dorothy Brock (Bebe Daniels), depends on a wealthy admirer for the musical's financial support, but she can't seem to give up her old flame (George Brent) for the sake of her career. When Dorothy breaks her ankle just before opening night, Peggy is forced to sink or swim as her last minute replacement.

The musical numbers are great fun, especially the cheeky "Shuffle Off to Buffalo," and "42nd Street" has become a classic of the genre. Baxter's line to Keeler, "You're going out a youngster, but you've got to come back a star!" is hopelessly sappy but still one of Hollywood's most memorable moments. Ruby Keeler really is the new kid in the film; this was her first screen appearance, and she is somewhat overshadowed by the scene stealing comediennes Ginger Rogers and Una Merkel. Rogers, of course, would go on to lasting fame as Fred Astaire's dancing partner, but she has a great role in "Anytime Annie" that lets her show how spunky, funny, and smart she could be.

42nd Street earned two Oscar nominations, including one for Best Picture. Lloyd Bacon and Busby Berkeley worked with Powell and Keeler again for Footlight Parade, which also appeared in 1933. George Brent went on to meatier roles as a leading man, starring with Bette Davis in Jezebel (1938), The Old Maid (1939), and Dark Victory (1939), among others. You'll find Ginger Rogers making her first screen appearance with Astaire in Flying Down to Rio (1933), but don't miss her starring comedic performance in The Major and the Minor (1942) or her Oscar winning work in the women's melodrama, Kitty Foyle: The Natural History of a Woman (1940). The delightful Una Merkel can also be seen in Destry Rides Again (1939) and It's a Joke, Son! (1947).

An earlier version of this review originally appeared on Examiner.com. The author retains all rights to this content.
Posted by Jennifer Garlen at 5:13 PM