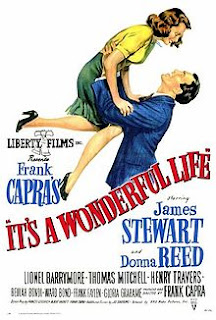 The vast array of memorabilia that has sprung up around It's a Wonderful Life (1946) over the last two decades tends to support the general sense of the holiday staple as the ultimate example of director Frank Capra's corny sentimentality, strengthening that idea we have of the movie being all about angels and family values and the treacly sweetness embodied in a kid named Zuzu. There are snow globes and coffee table books, Christmas tree ornaments and talking greeting cards, all of them spouting the fuzzy warmth of the movie's ending: "Every time a bell rings, an angel gets its wings!"

These things, as ubiquitous as they are, do not go to the heart of It's a Wonderful Life; they show us only the the last glimpse of a story that has endured not because of its few bright moments, but because of its deeper understanding of the dark side of Christmas and of life, as well. It's a Wonderful Life is a Christmas story for the losers, the nice guys who finish last, the Bob Cratchits drowning in a world of Scrooges. It's a holiday film for those who find themselves miserably and helplessly depressed, not in spite of the season, but because of it. For these reasons it remains ones of the best and most truthful of seasonal films, and people who only ever catch the ending have missed everything that matters about it. 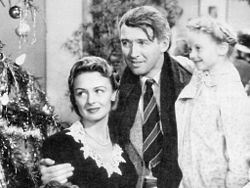 George Bailey (Jimmy Stewart) is a good man, yes, but this is a story that finds him trying to commit suicide at Christmas; his life has overwhelmed him so completely that the view from the bridge looks awfully tempting. Neither his loving wife (Donna Reed) nor their brood of young children are compelling enough reasons to keep George from jumping; it takes divine intervention to interrupt his despair, and that intervention turns up in the person of a daft little fellow named Clarence (Henry Travers), who tells a skeptical George that he is an angel. George, still miserable, wishes that he had never been born, and with this utterance the action of the story gets into gear, telling both the story of George's life and the story of life without George.

The memorabilia enshrines only the final scene of the film, that of a happy George and his family beneath the Christmas tree, but the darker scenes work themselves more subtly into the viewer's memory. George, having never been born, meets the woman who would have been his mother, and of course she does not know him. Lovely Mary, a lonely spinster, runs from him in fear. The grief stricken pharmacist whom George saved from a fatal mistake now wanders the town a broken drunk, mocked and reviled. Loathsome Potter, like a fat spider, looms over this town full of flies, and in George's absence the whole scene sinks and gasps and gives itself up to despair. Without George, the town becomes like him at the beginning of the film. His suffering is replaced by that of everyone else in Bedford Falls. 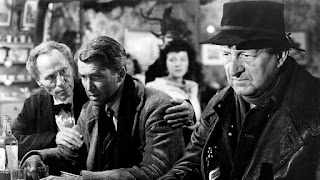 Of course, the ultimate message is positive, that one person makes a difference, that people will come together and do what is right when the time comes, that it really is a wonderful life, no matter how bad it may seem in the short term. Still, it acknowledges depression and suffering as a part of the Christmas experience, and it presents George as a sympathetic protagonist even when he is most unhappy. Looking at George's life in review, we have to admit that he has plenty of things to be unhappy about, and the redemption of George's faith at the end of the film is not a correction of his erroneous attitude so much as it is a long-overdue evening of the balance. George is not Scrooge, hardened and cruel, but Cratchit pushed one last lump of coal too far. We want to see him win for a change because we feel like him, overburdened, always one step behind our dreams, never in the right place at the right time to make life work for us for once.

Most of us have days when the view from the bridge looks tempting, and it's because of that shared misery that George speaks to us. If you have been a winner all your life and are happy at Christmas then you don't need to watch It's a Wonderful Life; it's not for you. It's for those of us who doubt, who grieve, who harbor sadness in our hearts as the carols are sung. It's for those of us who need to be reminded not so much that it's a wonderful life, but that we aren't alone in sometimes feeling that it's not.

An earlier version of this review originally appeared on Examiner.com. The author retains all rights to this content.
Posted by Jennifer Garlen at 2:53 PM