Classic Films in Focus: THE MAJOR AND THE MINOR (1942) 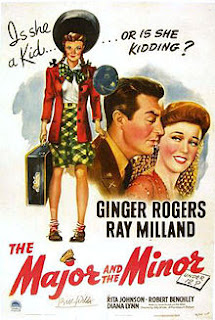 Billy Wilder would direct some of the most memorable films to come out of the Hollywood studio era, including Double Indemnity (1944), Sunset Blvd. (1950), and Some Like It Hot (1959), but every director has to start somewhere, and the relatively lightweight comedy The Major and the Minor (1942) was Wilder's first time directing an American film. Wilder and frequent collaborator Charles Brackett wrote the screenplay for this charmingly perverse picture, which foreshadows Some Like It Hot in its focus on the romantic misadventures that individuals can stumble into when they pretend to be someone they aren't. With a rich, if rather risque, subtext and lively performances from stars Ginger Rogers and Ray Milland, Wilder's The Major and the Minor is well worth watching, even if it doesn't pack the same cinematic punch as the illustrious director's later work.

Susan Applegate (Ginger Rogers) has been trying to make it in New York City for a couple of years, but she finally gets sick of the constant sexual harassment and unwanted attention and decides to head home to Iowa. She has prudently kept just enough money for a return ticket sealed in an envelope since her arrival in the big city, but she is devastated to learn that the train fare has gone up in the interim. She solves this problem by disguising herself as a twelve year old in order to qualify for the half price fare, and in this persona she ends up in the sleeping compartment of kindly Major Kirby (Ray Milland). Kirby's imperfect vision prevents him from discovering Susan's ruse even in close quarters, and he gallantly offers to help the "little girl" get home to her mother. The pair end up at the military school where Kirby teaches, and there Susan must attempt to perpetuate her deception in the face of Kirby's fiancee, the rest of the faculty, and an entire academy of eager adolescent cadets.

The well-developed Ginger Rogers is not particularly credible as a twelve year old, but that's part of the gag, especially because the rest of the adults are so good at seeing what they are told to see rather than what is right in front of their noses. Rogers has wonderful fun switching back and forth between her identities as adult Susan and childish "Su-Su," and her scenes with the lovestruck cadets are simply hilarious. Ray Milland is clueless but lovable as the myopic major; he's the ultimate straight man for all of the shenanigans that are going on around him, never quite figuring any of it out. Stealing her scenes as usual is the fantastic Diana Lynn as Lucy Hill, the sharp-eyed younger sister of the thoroughly nasty woman Major Kirby intends to marry. Lynn's precociously adult personality and hard-boiled way around a line make her a perfect foil for Rogers, and the two have some great scenes together as they plot against their common nemesis, Lucy's older sister, Pamela (Rita Johnson).

You could probably watch The Major and the Minor with the kids and have a swell time with the comedy of errors surface, but the subtext of the picture digs down into some of Wilder's favorite adult themes, including seduction and manipulation, along with an eyebrow-raising flirtation with pedophilia. We as the audience know that Susan Applegate is really an adult, but Major Kirby doesn't, and this makes his increasing attraction to "Su-Su" rather alarming. There is a foreshadowing of Lolita here, played for laughs, of course, but the idea of Ray Milland as an amiable, accidental Humbert Humbert is bound to make a modern viewer a little uncomfortable. Luckily for Wilder, Nabokov's novel wouldn't be published until 1955, so his original audiences were spared what is now an inevitable association.

Wilder's film depends upon two great assumptions about the sexes: men are born pigs, and women are born liars. The cadets at the school behave no better than the men in New York City, a point made more obvious by having one student actually be the son of the last metropolitan masher to put the moves on Susan. Only Kirby remains above this sort of behavior, a kind of masculine ingenue, which might help to explain his interest in the seemingly infantile Su-Su. Susan, Pamela, and Lucy all display a natural talent for deception; they play a vicious, complicated game with one another in which the men and boys are their pawns, with the unsuspecting Kirby as the final prize. This is heady stuff, either hilariously funny or unforgivably faithless; what Wilder here spins in the direction of comedy also spirals toward tragedy in Double Indemnity and Sunset Blvd.

Take a few minutes to appreciate Ginger Rogers' real mother, Lela Rogers, as Susan's mother in the film. They bear a very marked resemblance to one another, and it's an amusing example of the intermingling of life and art. For more of Rogers herself, see Top Hat (1935), Kitty Foyle (1940), and Monkey Business (1952). Ray Milland is best remembered today for his Oscar-winning performance in The Lost Weekend (1945), he also stars in The Big Clock (1948), Rhubarb (1951), and Dial M for Murder (1954) If you enjoy Diana Lynn's performance, which you certainly should, be sure to catch her in Preston Sturges' crackerjack comedy, The Miracle of Morgan's Creek (1944). Lynn also makes an appearance in the Martin and Lewis remake of The Major and the Minor, the 1955 film You're Never Too Young. Drew Barrymore's cute romantic comedy, Never Been Kissed (1999), offers another iteration of the same basic concept that drives Wilder's picture.

An earlier version of this review originally appeared on Examiner.com. The author retains all rights to this content.
Posted by Jennifer Garlen at 2:53 PM