Classic Films in Focus: MR. PEABODY AND THE MERMAID (1948) 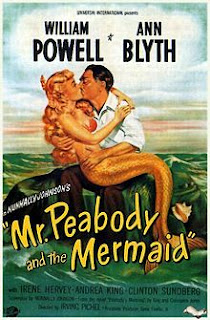 Mermaid movies turn up every now and then; the most famous is certainly Splash (1984), with Daryl Hannah and Tom Hanks, and among the more recent you'll find the modern tween fairy tale, Aquamarine (2006). Long before either of these films, however, dapper William Powell fell for a mermaid of his own in Mr. Peabody and the Mermaid (1948), which pitches the encounter as a mid-life crisis being experienced by Powell's character. Instead of a convertible or a human mistress, Powell's character lands a mythological maiden, much to the distress of his irritated wife. Although it certainly has fallen into obscurity, Mr. Peabody and the Mermaid is no lost masterpiece, but it's a fun little film for a quiet afternoon, and Powell fans will enjoy it just for another outing with the inimitable star.

Powell plays Arthur Peabody, a respectable Bostonian on vacation in the Caribbean after a serious illness. Peabody's convalescence is marred by the arrival of his fiftieth birthday, and he feels that his wife (Irene Hervey) is taking him for granted now that she sees him "safely" past the age of indiscretion. Her assurance is shaken, however, when Peabody accidentally lands a mermaid (Ann Blyth) and installs her in the resident fish pond. Peabody adores his ichthyoid idol, but the locals begin to wonder about his sanity. When his wife disappears, the resulting investigation threatens to ruin Peabody's romance and force him back to reality.

Powell really carries the picture, primarily because the female characters function as mere satellites to his protagonist. Ann Blyth is beautiful but mute as the mermaid (a sexist commentary on the perfect woman, no doubt), while Irene Hervey is rather shrill as the wife and Andrea King much too aggressive as the would-be paramour. That said, the scenes with the mermaid do have a magical quality of the type that viewers in 1948 might well have associated with Florida's Weeki Wachee Springs, where the famous live mermaid shows had just begun the year before. The sexual subtext of the plot is subtle enough that small children will probably enjoy watching the movie for the mermaid without noticing that it's really a story about midlife crisis and the idea of an extramarital affair as the cure for that ailment.

Mr. Peabody and the Mermaid is not currently available on DVD, but you can usually find it, along with dozens of other minor classics, on streaming sites like Netflix Instant Viewing and Amazon Instant Video.

An earlier version of this review originally appeared on Examiner.com. The author retains all rights to this content.
Posted by Jennifer Garlen at 11:46 AM