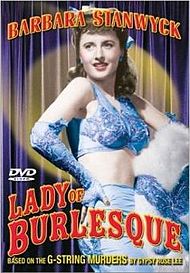 How does one make a movie about burlesque strippers during the height of the Hays Code? It seems like an impossible task, but that's exactly what Lady of Burlesque (1943) attempts to do, with Barbara Stanwyck as the titillating titular lady. It's a minor film from Stanwyck's body of work, directed by William A. Wellman and adapted from a novel by burlesque queen Gypsy Rose Lee, but it has certain charms, including a really striking quantity of exposed female flesh. As a backstage murder comedy, Lady of Burlesque delivers some laughs, several corpses, and an interesting perspective on the changing world of stage entertainment in the early twentieth century.

Stanwyck plays Dixie Daisy, the new girl in a burlesque show staged at an old opera house. She deals with the usual backstage politics, including jealousy and fighting among the girls and romantic entanglements among the various performers, but the atmosphere becomes even more heated when one of the strippers turns up dead, strangled by her own g-string. Dixie and an amorous comic, Biff Brannigan (Michael O'Shea), dance around their attraction to one another while trying to figure out who is conniving to ruin the show by killing off its stars. In the meantime, the killer strikes again, and the cops are ready to nab the first likely suspect in a crowd of offbeat characters.

The worst part of the movie might be Stanwyck's singing, but she looks great in the skimpy burlesque costumes and gives the dance numbers a good go. She seems perfectly at home in the backstage setting; in fact, Stanwyck herself was a product of that world, having been raised by her showgirl sister after the early death of their mother. The other girls are all amusing characters, especially Stephanie Bachelor's irritating prima donna, the Princess Nirvena. Michael O'Shea's Biff is a fun guy and a good match for Stanwyck, although Pinky Lee is funnier as the childlike comic, Mandy.

If you like Stanwyck's comedic turns in The Lady Eve (1941) and Ball of Fire (1941), you'll enjoy Lady of Burlesque, as well, and it's also good for those who like the backstage shenanigans of "puttin' on a show" films like 42nd Street (1933). Lady of Burlesque earned an Oscar nomination for its score, but there were a whopping 16 nominees for the award that year, including Casablanca (1941), although the winner was ultimately The Song of Bernadette (1943). Oddly enough, William A. Wellman's other 1943 picture was The Ox-Bow Incident.

For more of Stanwyck's lesser known films, try Night Nurse (1931), Baby Face (1933), and The Strange Love of Martha Ivers (1946). She earned an Academy Award nomination for Stella Dallas (1937) but is probably best remembered today as the scheming murderess of Double Indemnity (1944). Gypsy Rose Lee appeared in several films, including Stage Door Canteen (1943) and The Trouble with Angels (1966), but the memorable film associated with her is the biopic, Gypsy (1962), with Natalie Wood playing the striptease celebrity. See more of director Wellman's work in The Public Enemy (1931), A Star is Born (1937), and Westward the Women (1951). He made several other excellent Westerns over the course of his career.

Lady of Burlesque is now in the public domain, so you can watch it for free at the Internet Archive or on various streaming video providers like Netflix Instant Viewing.

An earlier version of this review originally appeared on Examiner.com. The author retains all rights to this content.
Posted by Jennifer Garlen at 5:29 PM