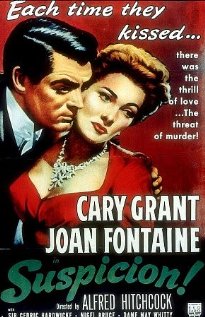 Alfred Hitchcock had broken into the American movie-making scene with Rebecca in 1940 and then quickly turned out a number of additional films, including the 1941 romantic thriller, Suspicion, which reunited the director with Rebecca star Joan Fontaine. This second outing with Hitchcock would win Fontaine an Oscar for Best Actress, and she certainly does have an intriguing role to play as a heroine who is simultaneously consumed by both passion and paranoia. With Cary Grant making his first of four career appearances in Hitchcock films, Suspicion offers plenty of classic Hollywood appeal, although its premise may tug at the conscience of the astute modern viewer.

Fontaine stars as Lina McLaidlaw, a "carefully brought up" English girl who falls for rakish Johnnie Aysgarth (Cary Grant) and elopes with him after a whirlwind romance. As it turns out, she knows very little about him, and his inability to manage or earn money begins to cast a shadow over their marriage, especially because he habitually lies to his wife about their finances. Johnnie then cooks up a real estate scheme with one of his pals (Nigel Bruce), but it begins to look like murder might have been Johnnie's ultimate plan, and Lina suspects that she herself will be his next victim.

Hitchcock has a great talent for bringing out the darkness in the usually genial Grant, and Suspicion uses that side of his persona to great effect. As Lina grows increasingly uneasy about her husband's true nature, we see the camera focus more and more on Johnnie's tightly controlled expressions whenever he stands behind her. What is he thinking? We are kept on edge about his intentions, and the suspense winds the audience just as carefully as it winds the anxious heroine. The ambiguity in Grant's character allowed the director to make changes to the plot of the film as it went through production, and it really is impossible to predict the ending from the earlier scenes. One of the best and most famous moments is the shot of Johnnie carrying a luminous glass of milk up a flight of dark stairs. The lit glass glows eerily in the frame, suggesting a hidden, sinister nature. Is it poisoned? Will Lina drink it, anyway?

That question brings up the biggest problem with the film. Murderer or not, Johnnie is a rotten husband, a liar and a swindler from the start, yet Lina loves him so helplessly that she melts every time she gets the slightest sign that he might really care for her. Watching Fontaine's heroine is almost painful at times because she not only tolerates but even seems to take pride in suffering Johnnie's lies and temper. There's a classic "Dear Abby" letter hidden somewhere in the subtext of the film, and it seems doubtful that marital counseling could solve the issue at hand, although a good divorce lawyer and a restraining order might be about right. Perhaps it's one of the ways in which the film shows its age, but the sexual politics that underlie the story might be the most horrific part of the whole picture.

Suspicion earned three Oscar nominations in all, including a nod for Best Picture, but Fontaine scored its only win. Look for English character players like Cedric Hardwicke, Heather Angel, and Dame May Whitty in the supporting roles along with Nigel Bruce, who is best remembered today as Basil Rathbone's bumbling Watson in a series of Sherlock Holmes films. If you like Hitchcock's early Hollywood work, be sure to see Shadow of a Doubt (1943), Lifeboat (1944), and Notorious (1946). For more of Joan Fontaine, try Jane Eyre (1943). You'll find Grant teaming up with Hitchcock again in Notorious as well as To Catch a Thief (1955) and North by Northwest (1959).

An earlier version of this review originally appeared on Examiner.com. The author retains all rights to this content.
Posted by Jennifer Garlen at 1:34 PM