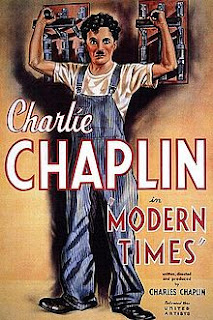 Long past the point where Hollywood had turned to sound, Charlie Chaplin continued to believe in the silent film, although Modern Times (1936) does make use of sound in its own unique way. This would be the final appearance of the Tramp character whom Chaplin had first introduced in the Keystone comedies over twenty years before, and, fittingly, it reveals a bittersweet sentimentality, mingling real suffering and injustice with its slapstick laughs. For many Chaplin fans, Modern Times ranks as the greatest of the artist's films, and it certainly retains its charms today, demonstrating the eternal appeal of Chaplin's work and his sympathetic everyman hero.

The Tramp, as usual, encounters wildly varying highs and lows over the course of his adventures, which begin with his employment in a large, impersonal factory. He soon suffers a nervous breakdown as a result of the monotonous, grinding work on the factory floor and is committed to an asylum. When he recovers, he learns that the factories have closed and work is scarce. Mistaken for the leader of a workers' protest, the Tramp is thrown into jail, but he becomes a cellblock hero when he prevents a jailbreak. He likes jail so much that he begs to stay even after his actions win him a pardon. Determined to return to the comforts of his cell, the Tramp aids a young street urchin (Paulette Goddard) in the hope of being arrested, but his relationship with the penniless girl eventually alters the course of his efforts.

Watching Modern Times in the current historical moment is a strange experience; sometimes it seems too modern for comfort. The film details the miseries of unemployment and poverty when work is hard to find, and it reveals the dangers of an automated, assembly-line society, where people literally function as mere cogs in the machine. Work of this kind will kill the soul, but its absence starves the body, and the Tramp is all too right in preferring his prison cell to such a terrible set of choices. Early in the film, voice and power are given to the factory boss, who sits idle in his office while he demands an increasingly breakneck pace of labor from the workers. The Tramp and the girl later find a temporary respite from hardship in the world of performance, where they support themselves by singing and dancing. The Tramp's song number, a comical tune sung in a gibberish language, finally gives him a voice, too, but outside forces conspire to rob the downtrodden pair of their refuge, just as political persecution would drive Chaplin himself from the United States in 1952.

Chaplin performs the Tramp brilliantly, as always, but Modern Times has the additional attraction of Paulette Goddard as the Gamin. Chaplin's girl characters were often melodramatic innocents, like the mission worker of Easy Street (1917) or the blind flower girl in City Lights (1931), but Goddard plays a feisty, scrappy girl of the streets, a dirty rebel who steals bananas and dances about with barefoot grace. When she appeared in Modern Times, Goddard was still an unknown appearing in uncredited bit parts, but she went on to have a successful Hollywood career; she even earned an Oscar nomination for Best Supporting Actress for her role in So Proudly We Hail! (1943). As the Gamin, her flashing eyes and defiant posture make her a fascinating foil to Chaplin's gentle Tramp, and she deftly proves her own ability to hold the screen with that iconic character. In real life, Goddard and Chaplin were romantically involved when this film was made, but their relationship ended in the early 1940s.

Modern Times is also known for its use of Chaplin's great musical composition, "Smile," which serves as a theme for the film. For more films starring The Little Tramp, try The Kid (1921), The Gold Rush (1925), and The Circus (1928). Along with Modern Times, City Lights (1931) is considered one of Chaplin's best pictures. Look for Paulette Goddard with Chaplin again in The Great Dictator (1940). She also makes memorable appearances in The Women (1939), The Ghostbreakers (1940), and The Diary of a Chambermaid (1946).

An earlier version of this review originally appeared on Examiner.com. The author retains all rights to this content.
Posted by Jennifer Garlen at 11:17 AM