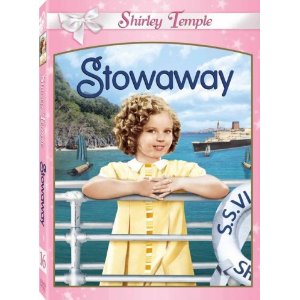 We watch a fair bit of Shirley Temple at our house, in part because my daughter has declared her to be "just awesome." Watching Stowaway (1936) with a hardcore Temple fan like that is an interesting experience; rarely does one see a picture with such a gushing devotee. While few adults are likely to share a little girl's passionate attachment to the curly-haired waif, Stowaway is a perfectly watchable and entertaining example of the Temple canon, and it features several adult stars, especially film buff favorite Alice Faye, who are likely to catch the more mature viewer's attention.

Temple is, as usual, an adorable little girl whose misfortunes put her in the market for a new family. Here she plays Barbara "Ching-Ching" Stewart, whose missionary parents were killed in China some years before the film opens, and whose strict foster parents also succumb to local violence when bandits descend on the village where they live. Ching-Ching escapes with the help of a kindly Chinese mentor (Philip Ahn), but she ends up on her own in Shanghai, where she encounters Tommy Randall (Robert Young), a wealthy American playboy who takes the orphan under his wing. Through his relationship with Ching-Ching, Tommy becomes involved with the attractive Susan Parker (Alice Faye), but Alice's engagement to another man proves a stumbling block to Tommy's romantic aspirations and to Ching-Ching's adoption by her newfound friends.

The Oriental exoticism of Stowaway sets it apart from other Temple pictures like Captain January (1936), Heidi (1937), and The Little Princess (1939). The plots of most of Temple's movies are so similar that it takes a unique atmosphere to differentiate them, and the Chinese setting is a nice choice, with lots of crowded street scenes, attractive costumes, and opportunities for the extravagantly cute star to speak Chinese. Tonally, the movie offers a mix of predictable Chinese stereotypes and more even-handed depictions, but it at least avoids the worst offenses that sometimes pop up in films of this era. The Sun-Lo character, played by Korean-American actor Philip Ahn, is clearly intelligent and a strong paternal force in Ching-Ching's life, but he functions mainly as a source of quaint proverbs and more or less vanishes from the movie once Ching-Ching leaves her foster parents' home.

Veteran comedy director William A. Seiter keeps the movie rolling along, and there's good chemistry between the adult performers to engage the audience's interest. Robert Young, best remembered today as television's Marcus Welby, MD, makes an affable hero whose affection for his young friend seems natural and sweet. Alice Faye is the feistier of the sparring pair; her upturned nose, sexy little overbite, and surprisingly deep singing voice bring a distinctive charm to a fairly straightforward role. Popular character actor Eugene Pallette, always a memorable presence, makes sporadic appearances throughout the film as one of Tommy Randall's drinking pals, while the ever proper Arthur Treacher plays Tommy's long-suffering valet, Atkins. Treacher performs his trademark butler character in several Shirley Temple films, including Curly Top (1935), Heidi, and The Little Princess, and there's a natural comic rapport between the two that enlivens their scenes together in most of their work.

Of course, Shirley Temple is the real star of the film, as winning and spunky as always as she tackles Chinese dialogue, song numbers, and a very amusing dance routine with a dummy of Fred Astaire. Her effervescent charm still melts the hearts of children and sentimental adults, but mere cuteness is not the limit of her appeal. She really does sing, dance, and act beautifully.

If you enjoy Shirley in Stowaway, you will appreciate her other films, as well. Avoid The Little Princess as a starting point if you are watching with young children; although it has become her signature picture, it contains too much emotionally wrought material for them to handle. The same goes for Wee Willie Winkie (1937), which is more a John Ford movie with Shirley Temple in it than a typical Temple film. Devoted Temple fans might also enjoy seeing her as an adolescent with Cary Grant and Myrna Loy in The Bachelor and the Bobby-Soxer (1947), while those who want something darker might prefer her performance with John Wayne in Fort Apache (1948).

An earlier version of this review originally appeared on Examiner.com. The author retains all rights to this content.
Posted by Jennifer Garlen at 2:28 PM