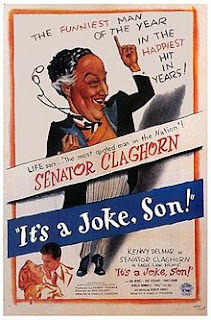 Southerners are known for their regional devotion, but the hero of It's a Joke, Son! (1947) takes that loyalty to absurd levels in this quirky comedy inspired by skits from Allens' Alley, a popular radio show hosted by comedian Fred Allen. Directed by Benjamin Stoloff, It's a Joke, Son! is a delightfully silly film, full of comic mischief and good humor, with truly funny performances from its leads. The comedy of the picture depends upon a gentle ribbing of Southern institutions and a more complex engagement of the gender struggles found in so many classic films, and fans of O Brother, Where art Thou? (2000) will find many similarities in tone and content between the two movies.

Kenny Delmar, who created the character for Allen's Alley, stars as the Southern fried hero, Beauregard Claghorn, whose devotion to Dixie is matched only by his subservience to his wife, Magnolia (Una Merkel). The Claghorns are at odds with one another over the romance of daughter Mary Lou (June Lockhart) with suitor Jeff Davis (Kenneth Farrell), whom Beauregard likes but Magnolia finds unimpressive. Their disagreements become more pitched when Magnolia and Beauregard end up running against one another in a political campaign, but the corrupted incumbent tries to disrupt the election by kidnapping Beauregard.

Jokes about Southern traditions abound. The Claghorns live off the income derived from a family mint farm, which supplies the necessary ingredient in mint juleps. Magnolia is first induced to run for State Senator at the prompting of The Daughters of Dixie, a clucking flock of old biddies who sit around lamenting the fall of the Old South and calling for the return of Prohibition. In one particularly entertaining scene, Beauregard accidentally serves the chattering scolds a potent mixed punch that soon loosens them up beyond all decorum. Beauregard's devotion to the South is so great that the only sure fire way to summon him is to play "Dixie," a tactic that his nagging wife frequently employs to roust him out of hiding.

The War between the States has given way, however, to the war between the sexes, and most of the plot of the movie revolves around Beauregard's attempt to stave off his domineering wife's efforts to get him completely under her thumb. Beauregard only runs for State Senator because, as he says, "My life wouldn't be worth living" if Magnolia were to achieve that kind of public, political power. Una Merkel's Magnolia is certainly one of the steel variety of that flower; even her daughter implores her to be kinder to her husband, although it takes a drastic turn of events for Magnolia to relinquish arms. Beauregard begins the movie thoroughly hen-pecked, but the end offers a sense of greater balance between the spouses, although we (thankfully) get no hint of punitive masculine revolt like that seen in Kiss Me, Kate (1953) or McLintock! (1963).

Classic movie fans will find a whole host of great character actors in this film. Look for Douglass Dumbrille and Jimmy Conlin as the crooked politicians. June Lockhart, of course, went on to television immortality as Timmy's mother on Lassie, and Daisy the Dog appeared in the popular series of Blondie films. Kenny Delmar, who had been the announcer on Allen's Alley, went on to do a fair bit of voice work on cartoons like Underdog, which is ironic because his own Senator Claghorn also turned out to be a cartoon character in the making. Beauregard Claghorn helped to inspire the creation of that memorable Looney Tunes rooster, Foghorn Leghorn, who borrowed not only the Senator's Southern pride but many of his catch phrases, as well.

It's a Joke, Son! is now in the public domain, so you can watch it online at the Internet Archive or other sites that stream legally available films. You'll find a very young Kenny Delmar in the 1921 D.W. Griffith film, Orphans of the Storm, but he mostly turns up on television programs and in cartoons. Catch Kentucky native Una Merkel in classics like 42nd Street (1933), Destry Rides Again (1939), and Summer and Smoke (1961), the last of which earned her an Oscar nomination for Best Supporting Actress. See more of June Lockhart's early career in Sergeant York (1940), Meet Me in St. Louis (1944), and Son of Lassie (1945). Douglass Dumbrille also stars in Mr. Deeds Goes to Town (1936) and A Day at the Races (1937), while Jimmy Conlin turns up in small roles in all sorts of places, but especially in Preston Sturges comedies like Sullivan's Travels (1941) and Hail the Conquering Hero (1944).

An earlier version of this review originally appeared on Examiner.com. The author retains all rights to this content.
Posted by Jennifer Garlen at 11:47 AM