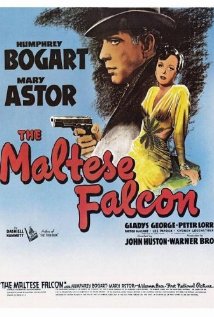 Few classic films are more iconic than The Maltese Falcon (1941). It occupies the same rarefied space reserved for The Wizard of Oz (1939), Gone with the Wind (1939), and Casablanca (1942), yet its mood and style set it apart from the lavish spectacles created by the first two films, while its razor sharp nastiness makes it a different picture entirely from the third, even though they share several of the same stars. The Maltese Falcon is also unique in its role as the first appearance of a wholly new kind of American film, the noir picture, even though its roots lie in the gangster movies and European expressionist films of the 1930s. As lean and wolfish as Sam Spade himself, The Maltese Falcon remains one of the most famous of all movies because each of its many parts works so perfectly that the whole does indeed become the stuff that dreams are made of.

Based very closely on the novel by Dashiell Hammett, The Maltese Falcon presents the story of Sam Spade (Humphrey Bogart), a private detective in San Francisco who finds his latest case more trouble than he expected when his partner, Miles Archer (Jerome Cowan), turns up dead. His attractive client (Mary Astor) offers Spade so many different names and half truths that getting to the bottom of Miles' murder requires getting involved with the mysterious lady's affairs right up to Spade's frequently imperiled neck. The whole seedy business boils down to a pack of thieves and a near mythical statue that all of them are willing to kill to possess.

Director John Huston penned the screenplay himself, and he wisely retained Hammett's grimly humorous lines and almost the entire plot of the original novel; this is really one of the most faithful adaptations of a literary work ever filmed for the big screen, and it says something about the slim elegance of Hammett's prose that such fidelity is even possible, even more that a faithful adaptation can simultaneously make for such outstanding cinema. Hammett's brilliant, jaded dialogue would come to epitomize noir cool, with lines like "Mrs. Spade didn't raise any children dippy enough to make guesses in front of a district attorney, an assistant district attorney, and a stenographer" and "When you're slapped, you'll take it and like it." Naturally, there are a few changes. A subplot involving a girl in Gutman's retinue gets dropped, and the end of the film differs in some subtle but important ways. Oddly enough, Huston's ending is actually a little nicer than Hammett's, if one can call either ending "nice" at all.

Hammett had described his protagonist as "rather pleasantly like a blond Satan" in the novel, and of course Bogart is not blond, but he captures perfectly the balance of light and dark that make up Sam Spade's character. Spade is no hero, although he eventually tells Brigid O'Shaughnessy that he isn't as crooked as she might think, that being morally ambiguous is part of the job of being a private detective. He catches Miles' killer not because he liked Miles (he didn't), but because it's bad for business to let a job like that get by right under the detective's own nose. Spade lives a rough life and likes it that way as long as it pays well enough, and Bogart's devilish grin conveys his control over every ugly situation, particularly when he needles the tightly wound Wilmer (Elisha Cook, Jr.) and dances his way around the questions of the local cops.

The rest of the cast give the performances of their careers here. Peter Lorre, Sydney Greenstreet, Mary Astor, and Elisha Cook, Jr. make for as faithless and dishonorable a den of thieves as one could hope for; their chemistry as a group crackles with equal parts menace and humor. As the effeminate Joel Cairo, Lorre walks a very fine line, suggesting the sexual attraction Cairo feels for Wilmer but keeping it subtle enough to get by the censors. Hammett had been able to get away with more of that aspect of the character in the novel, but it takes a character actor as brilliant as Lorre to make it work on screen without tempting the fate of the censors' morally anxious editors. Effie Perine, played beautifully by Lee Patrick, might be the only really lovable character in the whole thing, which is precisely why Spade won't give her the time of day. Astor, Patrick, and Gladys George as Iva Archer make a fascinating trinity of the feminine types that populate the noir world, and it's no surprise that the bad girls outnumber the good ones two to one.

The Maltese Falcon earned three Oscar nominations in 1942, although it won nothing, and How Green Was My Valley (1941) carried away all of the honors instead. In retrospect, Huston couldn't have felt too bad about that, since the other film that lost to the sentimental family drama that year was Citizen Kane (1941). For more of Bogart's best films, see The Big Sleep (1946), The Treasure of the Sierra Madre (1948), and The African Queen (1951), the last two of which were also directed by Huston. Look for Mary Astor in The Great Lie (1941), for which she won a Best Supporting Actress Oscar, and in The Palm Beach Story (1942) and Meet Me in St. Louis (1944). Don't miss Peter Lorre in M (1931) and Mad Love (1935), two early roles that helped to define the course of his macabre career. Elisha Cook Jr. turns up in all sorts of places, from Shane (1953) to Rosemary's Baby (1968), but he's great fun to watch in House on Haunted Hill (1959). You'll find Sydney Greenstreet in Christmas in Connecticut (1945) and The Woman in White (1948), but The Maltese Falcon and Casablanca are certainly his most memorable appearances on film.

An earlier version of this review originally appeared on Examiner.com. The author retains all rights to this content.
Posted by Jennifer Garlen at 8:36 AM