Classic Films in Focus: CHEAPER BY THE DOZEN (1950) 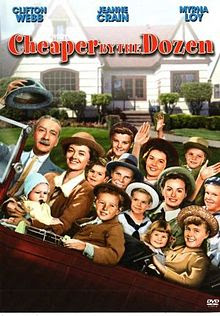 Tolstoy might have thought that happy families are all alike, but he didn't live during the era of Hollywood family films like Cheaper by the Dozen (1950), where the sheer diversity of happy families generated picture after picture about different domestic clans with their own unique stories. Thus we have movies like Meet Me in St. Louis (1944), Life With Father (1947), and I Remember Mama (1948), as well as many others, often adapted from non-fiction memoirs or thinly veiled autobiographies. Cheaper by the Dozen is no exception; based on the popular memoir by Frank B. Gilbreth, Jr., and Ernestine Gilbreth Carey, the original movie has nothing beyond its title in common with the purely fictional 2003 remake starring Steve Martin and Bonnie Hunt, and it certainly outshines the later picture in charm, poignancy, and inoffensive family amusement. While Cheaper by the Dozen is not among the greatest classic films ever made, it offers a very entertaining view of family life in the 1920s that both children and adults can enjoy, and its nostalgic presentation of parents as thoughtful, funny, and understanding people provides a welcome tonic to the way in which mothers and fathers are so often depicted in "family" films today.

Directed by Walter Lang, the movie stars Clifton Webb and Myrna Loy as the Gilbreth parents, whose own work in industrial engineering and efficiency has not prevented them from generating a family of twelve children, six boys and six girls. Jeanne Crain plays their eldest daughter, Ann, whose transition to womanhood creates some drama and humor within the family, as poor Ann is the first of the offspring to have to persuade her parents to let her grow up. The story of the family's life, leading up to a major event that alters it forever, is told through a series of vignettes spread out over several years.

Like many films of this sort, the vignette model for story-telling leaves something to be desired in the plot department; the sketches that we see are interesting and funny but don't really build the story's tension to a climactic height. If you have seen a number of family stories, or if you already know the history of the real Gilbreth family, you can see the major event of the movie coming, but the earlier parts of the film don't necessarily emphasize a movement in that direction, and the film uses the event as an endpoint rather than a climax. Some of the best scenes are the shortest and least consequential ones, like the father's interview with the principal at the children's school or the family's acquisition of a dog in spite of their patriarch's objections, but they demonstrate the family's love for one another and the father's intense pride in and devotion to his numerous brood. Even the smallest families will recognize the affectionate truth about parents and children living together in these scenes, and they may well prove productive starting points for conversations about important family decisions and situations.

Classic movie fans will appreciate Cheaper by the Dozen primarily for its leads; this is a chance to see Clifton Webb and Myrna Loy, both strong performers with illustrious careers, in some rather different roles. Webb rose to fame as the urbane villain of Otto Preminger's noir hit, Laura (1944), but he was also well known in the late 1940s as the snippy title character of the Mr. Belvedere films (which inspired the later television series). Webb's performance as the benevolently eccentric Frank Gilbreth makes for an interesting contrast with these other roles, and his version of the old-fashioned pater familias rounds out those of Leon Ames in Meet Me in St. Louis and of Willam Powell in Life With Father.

Loy, who began her career in silent films, was a major star in the 1930s whose biggest role came when she played Nora Charles opposite William Powell in The Thin Man movies. By the end of the 1940s, she had aged out of the vampish parts that opened her career and was playing more mature characters, including the loving war wife of The Best Years of Our Lives (1946) and the career-minded older sister in The Bachelor and the Bobby-Soxer (1947). As the Gilbreth matriarch, Loy combines her ladylike bearing and visible intelligence with the soft, angelic vision of maternity so often associated with motherhood in these sorts of films. That she does it without becoming a wan sort of martyr to domesticity is a testament both to her own acting talent and to the real Lillian Gilbreth, who held a doctoral degree in industrial psychology and was tremendously influential in her field, so much so that she is sometimes called "The First Lady of Engineering" and even had a US postage stamp issued in her honor as a Great American in 1984.

If you enjoy movies about large families or Americana, Cheaper by the Dozen offers a good choice that the entire family can watch together. If you find yourself really interested in the story of the Gilbreth family, you'll be happy to know that the first film was popular enough to warrant a sequel, Belles on Their Toes (1952), adapted from the follow-up memoir written by the Gilbreth children. Both of the memoirs are currently available in print, and those who want to know more about Lillian Gilbreth might enjoy Jane Lancaster's 2006 biography, Making Time: Lillian Moller Gilbreth - A Life Beyond "Cheaper by the Dozen." For more from director Walter Lang, try the Shirley Temple version of The Little Princess (1939), the musical classic, The King and I (1956), or the Tracy and Hepburn comedy, Desk Set (1957).

An earlier version of this review originally appeared on Examiner.com. The author retains all rights to this content.
Posted by Jennifer Garlen at 5:02 PM