Like Of Human Bondage (1934), The Letter is another Bette Davis film based on a W. Somerset Maugham work, and it's clear that Maugham was a master at writing the kind of duplicitous, destructive character Davis was born to play. Directed by William Wyler, The Letter is a fascinating study in duplicity and deception, a film where every light side has its dark double and every shot is laden with layers of meaning for the astute observer. The anti-heroine of the film is one of Davis' most insidiously destructive roles, never overtly evil and yet capable of bringing death and ruin to every man who comes near her. Nominated for seven Academy Awards in 1941, The Letter won nothing, but the merit of a film should never be determined simply by the number of gold statues it accumulates, as this deadly little fable offers quite an exciting ride as well as an intriguing depiction of Orientalist hysteria.

The film opens as plantation wife Leslie Crosbie (Bette Davis) pursues a mortally injured man out onto the veranda of her home. She proceeds to empty a pistol into the mysterious stranger, and the loud reports of each shot stir the sleeping plantation workers to life. Soon her husband, Robert (Herbert Marshall), and a small cadre of other white men are gathered to sort out the facts of the incident. Leslie insists that the dead man assaulted her in a drunken passion and that she shot him in self-defense, a story that her husband and her defense attorney (James Stephenson) both seem prepared to buy. Unfortunately for Leslie, the dead man's widow has a letter that suggests the truth about what happened that night at the plantation.

The story is set in the East, first at the Crosbies' rubber plantation in British Malaya and then in Singapore, where Leslie's trial takes place. The contrast between the refined, over-dressed English and the native population is marked; the sweaty, impassive faces of the plantation workers fill the scene after the shooting incident ends, and then the white men arrive, casually bossing everyone around and imposing order with their rules and formalities. The Brits merely look rumpled and uncomfortable most of the time; repression is a way of life with them. The idea that one might succumb to passion is unseemly and despicable; believing the dead man to be guilty, they congratulate Leslie on her proper response to such outrageous behavior, little suspecting that it is Leslie herself who has really become consumed by animal lust. This is, of course, the danger of the East; one risks infection through too much contact.

That alarming Orientalist fear is realized in the dead man, as well, who turns out to be Geoffrey Hammond (David Newell). Hammond had been notorious as a ladies' man before inexplicably marrying a Eurasian woman, an act that is seen as a kind of race betrayal, even though the woman is half European. The film makes much of the opposition between the fair-skinned, light-haired Leslie and the fantastically exotic Mrs. Hammond, who is played as a kind of dragon lady by a heavily made-up Gale Sondergaard. It would be offensive if it weren't so obviously ironic, with pointedly Eastern music entering Max Steiner's score each time Mrs. Hammond appears on screen. In one telling scene, Leslie enters Singapore's Chinatown to buy the incriminating letter from Mrs. Hammond. Leslie appears in a heavy white veil, looking innocent and frightened but bravely going on, while the imperious Mrs. Hammond looks down on her with a fixed expression of hatred, her dark face framed by black hair and lavishly foreign jewelry. Which is the offender, and which is the victim? The film challenges us to contrast the facts that we know with the stereotypes that we see. 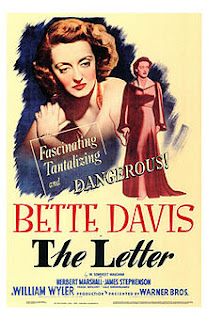 Director William Wyler uses symbols to full effect, including the clouds that move over the moon and the long shadows that reach out from the characters and dominate the screen. The most interesting symbolic element is Leslie's compulsive lace-making. We see her at it over and over throughout the film, tatting the way that a spider spins a web. Like a black widow, she lures the men around her into her trap and then destroys them. Her husband is devastated to realize that his wife is a stranger to him, her lawyer betrays his own ethics to defend her, and her lover ends up dead. The elaborate lacework that she constructs represents her creation of a life built out of lies; when she becomes unable to work at it any longer, we know that she has become disgusted with her own duplicity, but the damage that she has done to the men cannot be undone, and only one ending awaits.

Rebecca (1940) swept the Oscars the year that The Letter was up for its awards, but in retrospect The Letter is certainly the tighter and more thrilling of the two films. For more of Bette Davis, see The Petrified Forest (1936), Jezebel (1938), and Dark Victory (1939). Be sure to catch Gale Sondergaard as the amusingly coquettish Inez Quintero in The Mark of Zorro (1940); she won a Best Supporting Actress Oscar for her role in Anthony Adverse (1936) and was nominated again for Anna and the King of Siam (1946). James Stephenson, who earned a Best Supporting Actor nomination for The Letter, also appears with Davis in The Old Maid (1939) and The Private Lives of Elizabeth and Essex (1939). William Wyler earned a dozen nominations for Best Director and won for Mrs. Miniver (1942), The Best Years of Our Lives (1946), and Ben-Hur (1959).

An earlier version of this review originally appeared on Examiner.com. The author retains all rights to this content.
Posted by Jennifer Garlen at 10:35 PM