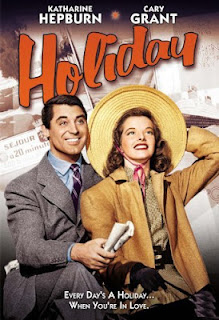 Cary Grant and Katharine Hepburn starred in two films together in 1938: they made Bringing Up Baby with Howard Hawks, of course, but they also made Holiday with George Cukor. The Hawks film is the more famous of the two today, but Holiday is a great movie, too, with a more serious undertone seasoning its use of the familiar conventions of the romantic comedy. There are no leopards here, but there is genuine feeling and an acute awareness of the more painful emotions that so often erupt when one unexpectedly falls in love.

Grant stars as Johnny Case, a smart young businessman (pulled up by his own bootstraps, naturally) who has fallen in love with Julia Seton (Doris Nolan), not knowing that she is really extremely wealthy. He arrives at her address and promptly goes to look for her in the servants' quarters, assuming that she must be a maid or a secretary in this imposing edifice. Imagine his surprise when he learns that his intended is not only loaded but that she has some pretty firm plans of her own about what their marriage is going to entail. Johnny soon finds himself being pushed and pulled in several directions at once, caught between his own hopes and dreams and the increasingly insistent demands of his future wife and father-in-law. His expectations are further altered by his introduction to Julia's sister, Linda (Katharine Hepburn), a free spirit painfully stifled by the overly controlled atmosphere that comes with the Seton wealth and privilege.

Classic Hollywood films so often promote the fantasy of the whirlwind romance, where boy meets girl and then both of them immediately meet the justice of the peace. It's an aspect of the romantic comedy that I find troubling, although sudden marriage helps explain the popularity of the second marriage plot in other films, where characters who previously fell for each other too quickly have to learn to understand their relationship properly the second time around. Holiday points out some of the problems with the usual gallop to the altar: Johnny doesn't know anything about Julia, and the more he knows the less in love he becomes, but by then they are already engaged and everybody expects a wedding. Of course, Linda has lived with Julia all her life, and she doesn't seem to know her sister any better than Johnny does. The two of them discover Julia's true nature together, and along the way they find out that they have a lot in common, including a perverse sense of loyalty to the unworthy Julia that might end up wrecking their own chance at happiness.

The principal performers bring a balanced mix of drama and comedy to their roles. Hepburn and Grant are two of a kind, both witty and elegant, equally capable of wild physical comedy and stirring emotional depth. Grant's acrobatics are particularly fun to watch; his Johnny is a man who literally bounds with zeal, even as Julia attempts to contain and repress that lovable energy. Hepburn is funny and wry but also bitterly unhappy as Linda; she yearns to break free from her buried life but can only take refuge in the playroom until Johnny appears and shows her the way out. Even more tragic is the role of Ned, beautifully played by Lew Ayres. Ned has the misfortune to be his father's only son, his natural talent for music crushed and wasted by the old man's desire for an heir to the business throne. Ned sees alcohol as his only way of escaping and avenging himself, and no movie drunk was ever more graceful or more pitiful than this young man. The final scene between Ned and Linda is especially moving; he wants to go with her, wants her to go, but he seems too much resigned to his fate to be able to defy his scowling father once and for all.

Edward Everett Horton and Jean Dixon have some wonderful scenes as Johnny's friends, a dotty academic couple who love Johnny like a son and only want to see him happy with someone who is right for him. Anyone who has ever been thrust into an uncomfortably high class social setting will sympathize with the Potters as they fidget and squirm their way through Johnny and Julia's engagement party. Every minor faux pas unsettles them and becomes magnified until they are reduced to hiding from the rest of the guests. In the vocabulary of the film, this is how we know that they are real people and not stuffed shirts like the majority of the Seton crowd. Their inclusion in the playroom set reveals their worth as individuals, just as it tells us that Johnny and Linda are made for each other. Being a proper grown-up isn't all that it's cracked up to be, since the childish characters are the only ones who seem to know how to have any fun. Tragedy is the province of the adults in this movie; comedy belongs to those who can listen to their inner child.

Holiday earned an Oscar nomination for Best Art Direction but could not compete with The Adventures of Robin Hood (1938), which won that award and two others in a year of stiff competition. For more of Hepburn and Grant, see Sylvia Scarlett (1935) and The Philadelphia Story (1940). George Cukor, who directed both of those films, also directed Dinner at Eight (1933), The Women (1939), and My Fair Lady (1964). Lew Ayres earned an Oscar nomination for Best Actor for Johnny Belinda (1948), but you can also see him in All Quiet on the Western Front (1930), the Dr. Kildare movies, and Advise & Consent (1962). Don't miss the delightful Edward Everett Horton providing comic relief to Fred Astaire and Ginger Rogers in The Gay Divorcee (1934), Top Hat (1935), and Shall We Dance (1937).

An earlier version of this review originally appeared on Examiner.com. The author retains all rights to this content.
Posted by Jennifer Garlen at 11:32 AM