Classic Films in Focus: A NIGHT IN CASABLANCA (1946) 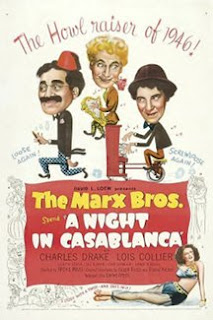 Originally intended as a parody of Casablanca (1942), the Marx Brothers picture, A Night in Casablanca (1946), bears only passing resemblance to the earlier film. Not surprisingly, the picture veers off wildly from the ostensible source material, allowing Groucho, Harpo, and Chico to ply their trademark zany gags and one liners to great effect. The funny business gets off to a slow start, but it moves into full swing once the three Marx characters are brought together, and there are moments hilarious enough to make even the most jaded viewer laugh out loud. Though not as famous as Duck Soup (1933) or A Night at the Opera (1935), A Night in Casablanca is a fun film that demonstrates the wacky talents of these classic comedians, and parents might find it very useful as a way to introduce children to the delights of classic movies.

The plot really doesn't matter, but it revolves around a hotel in Casablanca where all of the managers are being murdered by former Nazis who want to find a hidden cache of their ill-gotten loot from the war. Groucho appears as the new manager, Ronald Kornblow, while Harpo and Chico are Rusty and Corbaccio, two bumbling fellows who work a motley assortment of odd jobs around the city. Straight man Zeppo had already departed from the act at this point, so handsome Charles Drake takes the job in the guise of Lt. Pierre Delmar, suitably paired up with romantic interest Annette, played by Lois Collier. Sig Ruman seems to be enjoying himself thoroughly as the leader of the Nazis, while Lisette Verea plays his girlfriend, Beatrice, who attempts to seduce Groucho in an effort to bump him off. Despite their wild antics and relentless bumbling, our comic trio inevitably saves the day, allowing the romantic young people to get together and foiling the Nazis' dastardly plans.

Nobody, however, watches a Marx Brothers movie for the plot, and it definitely takes a back seat to the setting up of various gags and then paying them off. The only roles the brothers are really playing are those of Groucho, Harpo, and Chico, and that's who moviegoers paid to see, anyway. The later Marx Brothers films are basically cartoons staged with live actors, so the jokes are outsized and over the top as a matter of course. Our first glimpse of Harpo arrives as a policeman finds him literally "holding up a building" by leaning against it, and when the cop drags Harpo away, the building promptly crashes to the ground. Groucho slouches around delivering his usual innuendo filled zingers and chewing on his omnipresent cigar, but children won't notice that Groucho's lines are really off-color remarks, so they should cause even the most conservative parent little concern. Young viewers are much more drawn to Harpo, a true chaos engine, whose face lights up at every opportunity to create havoc. The scene in which Harpo and Chico cram customers and tables into a supper club is a great one; there's so much frantic energy going on, and in the midst of it all Groucho serenely dances on with Beatrice and makes wisecracks about the state of the place.

The best scene in the picture is probably the twist on the old hallway gag, where comic characters rush in and out of various hallway doors, often defying physical plausibility as they pop back and forth, much to the characters' confusion and the audience's delight. Shaggy and the gang from Scooby Doo are outstanding practitioners of this sort of humor, but the Marx Brothers offer a great variation on the theme by substituting the closets and luggage in the head Nazi's bedroom for the hallway doors. As the various Nazis attempt to pack up the loot and make their escape, the brothers pop in and out of the trunks and the closet, rearranging everything as they go and causing the Nazis to gnash their teeth in frustration at the strange and inexplicable events. The bit with the mysteriously moving closet doors is especially good, but the whole thing is a perfect example of the Marx Brothers' comedic timing and penchant for visual gags.

Personally, I think A Night in Casablanca is funnier than some of the earlier Marx Brothers films, like Animal Crackers (1930) and Horse Feathers (1932), in part because it seems a more cinematic experience, while the earliest pictures can be a little too aware of themselves as stage routines merely being acted out in front of a camera. They are all funny, however, and if you show one to junior film fans you might very well have to show them all, since the basic schtick remains constant throughout, and Harpo in particular is a delightful master of silent physical comedy, something that even very young viewers can appreciate. Older viewers should take a moment to savor the musical interludes; Chico and Harpo each get a chance to shine in the film, and their skills at the piano and the harp are truly impressive, proving that there was more to the Marx Brothers than the zany jokes for which they are chiefly remembered.

An earlier version of this review originally appeared on Examiner.com. The author retains all rights to this content.
Posted by Jennifer Garlen at 6:25 PM