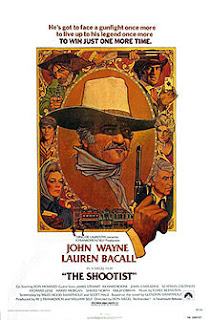 Don Siegel’s Western, The Shootist (1976), is best known today as John Wayne’s last film, the swan song of the genre’s most iconic star. Given its subject matter, no picture could be more appropriate for an actor’s final bow, but The Shootist also serves as an elegy for the West as a whole. It is a movie for adults only, not just because of the swearing and the blood, but because only people who are old enough to understand the quest for dignity in death can appreciate its themes. Helped by a moving performance from Lauren Bacall and supporting appearances from Ron Howard and James Stewart, The Shootist tells a compelling story about the end of one man’s life and the passing of the era that defined him.

Wayne is J.B. Books, a notorious gunman who comes to town looking for confirmation of his terminal illness from an old friend, Dr. Hostetler (Stewart). When the doctor gives him the bad news, Books takes up residence in a local boarding house run by a widow (Bacall) and her son (Howard). Books hopes to protect both his dignity and his privacy in his last days, but his reputation makes him an outcast, a celebrity, and a target, while his illness forces him to consider the kind of death he must choose to face.

Wayne, who was 68 when he made the film, gives one of his most affecting performances as the dying gunslinger. He brings a mixture of strength, humor, and sadness to the character that encourages us to sympathize with Books but not to pity him. He has made his choices and accepts them. When he rides into town at the opening we understand already that his time has passed; the cowboy looks conspicuously out of place in this new world, where streetcars rattle along and new-fangled automobiles are replacing the horse and buggy. It is too late for Books to settle down and join the new order; his subdued romance with the widow, Bond, is merely a taste of what might have been.

As a whole, the picture reflects the changing times of the Western. Sergio Leone and Sam Peckinpah had already remade the genre into a grittier, more violent vehicle for post-modern themes, leaving the traditional visions of John Ford and Anthony Mann behind. Siegel’s picture, shot in Technicolor, resorts to splashes of garish red blood, which seem both patently fake and unnervingly obscene. The saltier language also indicates an attempt to change with the times, but the presence of the Duke himself roots the picture in the old ways, as the opening montage of previous Wayne roles reveals. Westerns would never really be the same again, and 1976 would also be the year of Clint Eastwood’s The Outlaw Josey Wales, Robert Altman’s Buffalo Bill, and Arthur Penn’s The Missouri Breaks.

Don’t miss Harry Morgan, John Carradine, and Scatman Crothers in supporting roles. Don Siegel is also remembered as the director of Invasion of the Body Snatchers (1956) and Dirty Harry (1971). For more of Wayne’s late Westerns, see True Grit (1969), Big Jake (1971), and Rooster Cogburn (1975). Wayne and Stewart can also be found together in The Man Who Shot Liberty Valance (1962). Ron Howard would try his own hand at directing a Western with the 2003 film, The Missing.

Note: A shorter version of this review can be found on Examiner.com.
Posted by Jennifer Garlen at 10:26 PM