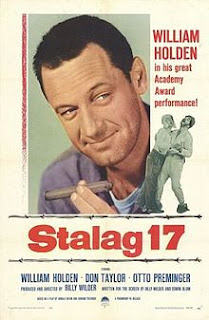 Stalag 17 (1953) is exactly the kind of war movie one might expect from Billy Wilder, the writer and director behind monumental classics like Double Indemnity (1944), Sunset Boulevard (1950), and Some Like It Hot (1959). Wilder’s darkest pictures inevitably reveal a grim sense of humor, while his funniest flirt with violence and death. Stalag 17 plays like a comedy, even though it’s set in a World War II POW camp and opens with the deaths of two of the prisoners. An outstanding ensemble of actors, led by William Holden, helps to sell this complex mix of humor and tension, and the result is a memorable story of wartime experience that stands alongside The Bridge on the River Kwai (1957) and The Great Escape (1963) as one of the best prisoner of war movies ever made.

Holden plays camp trader J.J. Sefton, one of a large group of American sergeants held in Stalag 17. When the Nazi guards repeatedly get wind of the prisoners’ plans and information, it becomes clear that someone on the inside is acting as an informant, and the other soldiers immediately suspect Sefton. The danger posed by the leak increases with the arrival of a new prisoner (Don Taylor), whom the Nazis will execute as a saboteur if they can get proof of his actions.

Wilder and Edwin Blum adapted the story from a stage play by former Stalag 17 prisoners Donald Bevan and Edmund Trzcinski, and Trzcinski even has a small role in the picture as the prisoner whose wife concocts a tall tale about “finding” a baby during his absence. Several of the supporting players are carried over from the play, including Robert Strauss and Harvey Lembeck as the scene-stealing Animal and Shapiro. Unlike some films adapted from plays, Stalag 17 avoids feeling overly staged and closeted because of the numerous outdoor scenes, most of which feature an incredible amount of mud.

Holden’s performance drives the story, but his jaded, opportunistic character is no hero. We have to dislike him enough to see why the rest of the prisoners suspect him, although a thoughtful viewer will also recognize the significance of his protection of Cookie (Gil Stratton), the story’s narrator and one of the most vulnerable prisoners in the barracks. The more obvious antagonists, Sgt. Schulz (Sig Ruman) and the camp commandant (Otto Preminger), are as ridiculous as they are menacing, much like the Nazis in Ernst Lubitsch’s To Be or Not to Be (1942). The other prisoners run the gamut of character types, from the heroic Lt. Dunbar (Taylor) and the shell-shocked Joey (Robinson Stone) to the boyish “Blondie” (Robert Shawley) and the camp clowns Animal and Shapiro. Take time to appreciate the solid performances of Richard Erdman, Peter Graves, and Neville Brand as the other residents of the barracks.

Note: A shorter version of this review can be found on Examiner.com.
Posted by Jennifer Garlen at 10:18 PM