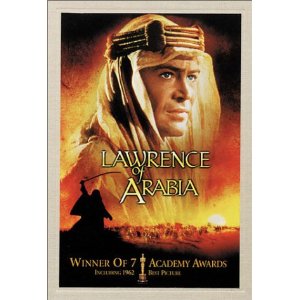 Like its protagonist, Lawrence of Arabia (1962) has become the stuff of legend, a film so critically acclaimed and celebrated that it is difficult to come to the picture itself without preconceived notions. It won seven Oscars in 1963, including Best Picture and Best Director for David Lean, with ten nominations in all to attest to its immediate success. It is, of course, an epic story told on a grand scale, with sweeping desert landscapes and camels silhouetted against the sun. It is also, however, a very personal and tragic account of a man who seeks greatness but finds it an excruciating burden to bear, a man whose sanity seems to hang in the balance even at the best of times. It is this aspect of the story, as much as its visual grandeur, that makes Lawrence of Arabia an enduringly compelling film.

Peter O’Toole takes center stage as the legendary T.E. Lawrence, a British officer stationed in Arabia during World War I. Lawrence sets out on an impossible quest to unite the Arab tribes against the Ottoman Empire, and he eventually becomes the leader of a surprisingly effective Arab army. His feats attract the notice of many powerful men, including Prince Feisal (Alec Guinness), General Allenby (Jack Hawkins), and the American journalist Jackson Bentley (Arthur Kennedy). Lawrence, however, struggles with the bloody experience of war and his own fame and suffers many painful losses during his time in the desert.

Lean’s direction merges characters and setting into a story that unfolds like a religious epic, with Lawrence as both messiah and madman (which might be the same thing). Lawrence’s essential difference from everyone around him and his constant, terrible suffering only increase his charismatic power, which rapidly evolves into something far beyond his control. He very much resembles Lancelot, the ill-made knight, as T.H. White imagines him in The Once and Future King. Behind the heroic posture lurks a dark side, a violent, sadistic urge that is also masochistic. All of these things are suggested in the thorniest moments of the story, when Lawrence is tortured by the Turks and later leads a massacre of retreating Turkish troops. Tragedy is ultimately his portion, which the film makes clear by opening with his death.

Peter O’Toole is justly applauded for his role as the enigmatic protagonist, but Lawrence of Arabia also features brilliantly nuanced performances from the supporting players. Omar Sharif’s Sherif Ali is the closest thing Lawrence has to a romantic interest; the dynamics of their relationship, which serves as the heart of the picture, prove endlessly complex. Alec Guinness plays Prince Feisal as a polished, calculating politician, one we aren’t meant to trust any more than we do the British leaders who see Lawrence as a PR opportunity and an expendable catspaw, while Anthony Quinn acts as foil to Guinness in the part of the rougher, louder Auda Abu Tayi. Claude Rains only appears in a few scenes, but he makes those count, and Arthur Kennedy gives a very sharp performance as the opportunistic reporter.

Come for the splendid scenery, by all means, but stay for the story. The truth about T.H. Lawrence might be shrouded in myth and rumor, as it was even in his own lifetime, but he was beyond doubt an extraordinary man, just as Lawrence of Arabia is an extraordinary film.

Note: A shorter version of this review can be found on Examiner.com.
Posted by Jennifer Garlen at 4:19 PM