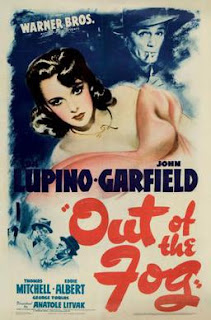 Director Anatole Litvak's Out of the Fog (1941) delivers on the promised atmosphere, with fog heavy piers and dark alleys providing a moody setting for this story of Brooklyn's waterfront working class, but the tone veers away from true noir thanks to the sympathetic and often very funny characters played by Thomas Mitchell and John Qualen. Adapted from a play called The Gentle People by Irwin Shaw, the movie also features compelling performances from John Garfield and Ida Lupino as more typical noir types, with Eddie Albert in a supporting role, but the title of the original work suggests that the characters played by Mitchell and Qualen, two old men who dream only of boats and fishing, are the real protagonists here. Still, Garfield and Lupino fans will find plenty of scenes with the stars to appreciate, and the picture's message about standing up to a bully is a pointed commentary on the looming American entrance into World War II.

Mitchell and Qualen play Jonah Goodwin and Olaf Johnson, two working men who are saving their money to buy a seaworthy fishing boat for a long imagined trip to Cuba. Their dream is threatened when small-time racketeer Harold Goff (John Garfield) forces them to pay protection money for the little boat they already own. Goff also takes up with Goodwin's restless daughter, Stella (Ida Lupino), who chafes at her bland future with boyfriend George (Eddie Albert) and is attracted by the money and excitement Goff offers. With Goff trying to steal both his savings and his daughter, Goodwin becomes increasingly desperate to make a stand against the dangerous gangster.

Garfield's crook is a grinning menace, bright enough to cause trouble and make himself untouchable by the local law while happily spending his ill-gotten cash. In an especially ironic moment, he uses the money he just extorted from her father to buy Stella a bottle of perfume. Even Stella knows Goff is headed for a violent end, but she likes the excitement of being around him after her humdrum days as a telephone operator and nights on predictably cheap dates with George. Garfield and Lupino don't give us the impression that these two characters share any genuine romance; they're just thrill seekers using each other for their own ends. If they really loved each other this would be an entirely different, and much darker, story because it's clear that nothing good can come out of their relationship. George would undoubtedly be better off with a steadier girl than Stella, especially as a wife, but she doesn't seem any more devoted to him than to Goff. She's a young version of the two older women we see in the picture: her mother, played by Aline MacMahon as a shrill hypochondriac, and Caroline (Odette Myrtil), the domineering owner of the restaurant where Olaf works. Domestic bliss is a myth in this world.

Counterbalancing the classic noir setup are Mitchell and Qualen as the kindly old men, whose scenes without Garfield generally involve fussing about their boat, dodging their disagreeable women, and debating the merits of making a stand against Goff. Mitchell, a brilliant character actor with iconic appearances in Stagecoach (1939), Gone with the Wind (1939), and It's a Wonderful Life (1946), deftly navigates the shifts between gentle comedy, paternal suffering, and hardened resolution. Qualen acts more as his sidekick but perfectly embodies the cook's mild-mannered, philosophical nature. Given the noir atmosphere of the picture the two seem destined for victimization, but the third act sees them rally against their oppressor, first through the useless court of law and then through their own devices. Throughout the narrative they make an argument to the audience about the importance of pushing back against an insatiable antagonist who only takes more and more if left to operate unchecked. The parallels between Goff and Nazi Germany aren't meant to be subtle, especially with Jonah and Olaf frequently punctuating their conversations with discussions of what America ought to be.

Lupino and Garfield also starred in The Sea Wolf (1941) the same year they made Out of the Fog. Garfield would go on to a particularly memorable noir role in The Postman Always Rings Twice (1946), while Lupino would star in The Man I Love (1946), Road House (1948), and On Dangerous Ground (1951). Thomas Mitchell is easy to find given his prominent roles in some of Hollywood's greatest hits, but look for more of prolific supporting player John Qualen in The Grapes of Wrath (1940), Casablanca (1942), and The Man Who Shot Liberty Valance (1962). Anatole Litvak also directed the noir classic, Sorry, Wrong Number (1948), and earned an Oscar nomination for Best Director for The Snake Pit (1948). Moontide (1942) makes a particularly good follow-up to Out of the Fog because it reunites Lupino and Mitchell in another waterfront noir, this time costarring Jean Gabin and directed by Archie Mayo.

Posted by Jennifer Garlen at 12:08 PM