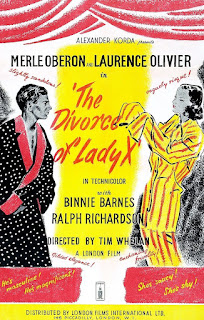 While not on par with the greatest of the screwball comedies, The Divorce of Lady X (1938) delivers a thoroughly engaging British take on the genre with notable performances from two iconic stars. Laurence Olivier and Merle Oberon lead a fairly small cast in this second adaptation of Gilbert Wakefield's play, Counsel's Opinion, the first having appeared under that title in 1933. Alexander Korda produced both versions and even brings back Binnie Barnes, who previously had Oberon's role, as one of the supporting characters, while Tim Whelan provides direction. Gorgeous Technicolor brightens the scenes, especially a fancy dress ball at the beginning of the picture, and the absurd comedy of the mistaken identity plot keeps the mood lively and light, even though Olivier's dialogue occasionally veers into sexist rants about the nature of womankind. Fans of the two stars and screwball comedy in general will appreciate The Divorce of Lady X for its madcap romance and the chance to see Olivier and Oberon paired in a lighter setting than the more famous Wuthering Heights (1939), which would be the last time the two shared the screen.

Olivier plays barrister Everard Logan, who specializes in divorce cases and has returned to London for an important trial when a heavy fog brings the entire city to a standstill for the night. He nabs the last room at a nearby hotel just before a mob of trapped party guests descends on the front desk demanding places to sleep. Unwilling to share his suite with a group of ladies, Everard nonetheless finds himself giving up his bed and his pajamas to the relentlessly charming Leslie (Merle Oberon), who tells him that she's a married woman and refuses to disclose her last name for the sake of discretion. When an incensed Lord Mere (Ralph Richardson) later appears in Everard's office to demand a divorce from his wife, the circumstance lead Everard to assume that Leslie is actually Lady Mere, making him the co-respondent in the impending trial.

Despite accounts of their dislike for one another, Olivier and Oberon generate plenty of chemistry onscreen, perhaps because love and loathing both radiate palpable energy that can be hard for the viewer to differentiate. Oberon's feline smile and wide eyes suit the scheming Leslie perfectly; like most screwball heroines, she takes control of the romance from the start and then upends every aspect of the hero's life. We learn quite early on that Leslie is not Lady Mere and is, in fact, a single young lady and perfectly acceptable love interest, but the ironic comedy of watching Everard suffer under his assumptions delights Leslie and the audience. Our introduction to the barrister sets him up as a selfish cad with a history of questionable liaisons, so we don't judge Leslie too harshly for manipulating him and then forcing him to prove his devotion repeatedly. Everard needs to be taught a few lessons, and Leslie, the granddaughter of a powerful judge, is just the girl to teach them. It's also great fun to watch Olivier, so lionized now for his serious Shakespearean roles, fumble about in pajamas or try to hide his face from the notice of Lady Mere's maid. His physical comedy here never rivals that of Cary Grant or Henry Fonda in their best screwball parts, but Everard has a lot in common with David Huxley and "Hopsy" Pike as he careens between pleasure and panic.

The reveal scene at the end falls a bit flat, and the movie feels like it could do more with its supporting characters, especially Binnie Barnes as the real Lady Mere and Morton Selton as Lord Steele, but the biggest hiccups are the moments of sexist nonsense. Everard has one scene where he humiliates a woman in court solely because of his frustration with Leslie; he rants about the deceptive, irrational nature of women and how they don't deserve independence and respect. Later, when he's happy, he gives the reverse of the same speech, now lauding women as helpmates and loving companions to men but still not recognizing them as human equals in any capacity. Everard wants to read Leslie - and all women - as either evil temptresses or angels in the house, but Leslie's character throughout the movie defies both categories. She's a bit of each, depending on the moment, but mostly she's a very intelligent, ambitious young woman who has no chance of her own career but sees Everard as husband material with potential for greatness. In a modern setting Leslie could be ambitious for herself, and she'd certainly make a cunning lawyer or politician with her ability to talk a complete stranger out of his room, his bed, and his pajamas for the night. It's grating to think that Everard can understand so little about her even after their misadventures end in mutual affection.

Olivier's big pictures following The Divorce of Lady X include Rebecca (1940), Pride and Prejudice (1940), and That Hamilton Woman (1941), but if you like him as a romantic comedy lead try The Prince and the Showgirl (1957), which pairs him with Marilyn Monroe. Merle Oberon also stars in The Scarlet Pimpernel (1934), The Cowboy and the Lady (1938), and That Uncertain Feeling (1941). Oberon and Binnie Barnes both get beheaded as wives in The Private Life of Henry VIII (1933), which came out the same year that Barnes played Leslie in Counsel's Opinion. Although he's hamming it up here as the foolish Lord Mere, Sir Ralph Richardson is remembered as a great Shakespearean stage actor whose extensive film credits include Anna Karenina (1948), The Heiress (1949), and Doctor Zhivago (1965).

Posted by Jennifer Garlen at 1:40 PM