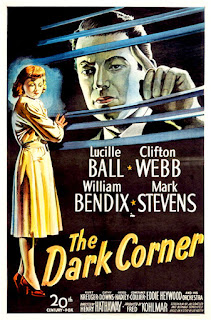 Henry Hathaway directed the very solid Fox noir, The Dark Corner (1946), which features genre standouts like Mark Stevens, William Bendix, and Clifton Webb, but most viewers will be drawn to the picture for Lucille Ball, an actress not normally known for noir roles but perfectly at home as the loyal heroine of this romantic detective mystery. The love story between the private eye and his secretary lightens the overall mood in a tale of betrayal, deception, and revenge, but we get plenty of hard-boiled action thanks to Stevens' scenes with Bendix, who knows how to make the most of a tough guy role. With plenty of double crosses and twists to keep the audience guessing, The Dark Corner has everything a noir fan could want, even if it doesn't spin as nasty a plot as some of the genre's darkest gems.

Mark Stevens stars as private detective Bradford Galt, who's trying to rebuild his life after a frame job by a crooked former partner in San Fransisco stuck him with a two year prison sentence. He's making good progress with his new office and his attractive secretary, Kathleen (Lucille Ball), at least until it looks like his old foe, Jardine (Kurt Kreuger), is back to torment him again. Galt's efforts to to learn the truth about his latest string of bad luck set him on the trail of Jardine, a shady henchman (William Bendix), and a wealthy art collector named Hardy Cathcart (Clifton Webb), whose beautiful wife is Jardine's latest conquest.

Stevens is well cast in the detective role, which requires him to shift between hard-boiled violence and budding romance with Ball. His good looks and jawline make him an attractive leading man, and he's equally capable of making eyes at his leading lady and throwing punches at his male costars. Ball, of course, already has that star power about her, and her Kathleen quickly emerges as a very compelling character, practical but good-hearted, and smart enough to be the detective herself. Too often noir detectives ignore Kathleen's type in favor of smoky-eyed femme fatales, but luckily for Kathleen she doesn't have any competition in that department. It's always fascinating to see Lucille Ball in her roles before TV stardom made her an icon; we think of her now as a goofy comedian, but she can be glamorous and serious when the role allows.

The supporting players spread out our attention between them fairly evenly, partly in order to keep us guessing about their motives and relationship to Galt's predicament. Kurt Kreuger is suitably smooth as the blackmailing serial adulterer who makes wealthy married women pay for falling in love with him, and Clifton Webb oozes his trademark sinister charm as the art lover who has acquired a much younger and very alluring wife. Cathcart's obsession with his wife, Mari (Cathy Downs), recalls that of Robert Browning's speaker in "My Last Duchess," particularly when we see him pull back a curtain to reveal a portrait whose subject looks remarkably like her. If Mari read more poetry she might know better than to tempt Cathcart's jealous wrath. Bendix enjoys a little more screen time than his fellow cast members because he handles the dirty work of persecuting Galt, but he's so good as a heavy that the audience can't complain. Reed Hadley drifts into the picture for a few scenes as policeman Frank Reeves, a local cop who wants to make sure Galt sticks to the straight and narrow path of legality after his prison stint.

Posted by Jennifer Garlen at 11:21 AM