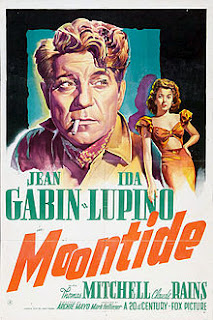 Although its name doesn't telegraph anything about the plot, Moontide (1942) does give the viewer an accurate impression of its mood, which is dreamy but dark, yielding a seductive fantasy with noir's sharp edge, or perhaps a noir film with romance's soft center. France's Jean Gabin and rising star Ida Lupino take top billing as two bits of lonely flotsam washing up together into love and peril, and under the direction of Archie Mayo they drift across the screen into each other's arms, even as the treachery of an unlikely enemy threatens them both. Moontide is an unusual picture, not, perhaps, essential viewing for noir or romance fans, but certain to appeal to those who like their genres mixed with a side of European sensibility. Unexpected performances by Thomas Mitchell and Claude Rains have their own charms, while Gabin and Lupino have plenty to offer in their chemistry onscreen.

Gabin stars as Bobo, a French longshoreman who can't remember what happened after a long night of drinking near the California docks. His parasitic friend, Tiny (Thomas Mitchell), suggests that Bobo might have killed a man during his drunken stupor, which Tiny sees as reason for the pair to leave town quickly. Troubled by the idea but not convinced of his own guilt, Bobo instead takes a job running a remote bait barge, where he saves the desperate young Anna (Lupino) from suicide. The two fall in love and decide to marry, but Tiny proves dangerously jealous of Anna and her ability to affect Bobo's plans.

Moontide struggled with many problems during production, not least of which was the departure of Fritz Lang as the original director, but none of them diminish the film as it appears onscreen. Gabin has a great face for this kind of picture, broad and strong, but open and innocent in its own way; like everything else about the movie, he occupies the space where noir and romance meet. We believe that he might have strangled a man to death in a boozy rage, but we also believe that he might not. After all, he isn't sure himself. Lupino, having electrified the screen with her courtroom crackup in They Drive by Night (1940), here takes a turn as a fragile waif, a girl broken by life when we first meet her but strong enough to survive incredible suffering if only someone like Bobo will give her a reason to keep going. Her appearance in the film's poster makes her look like a juke joint floozy, but the dress is merely an odd gift of Bobo's; Anna is a kind, simple soul who yearns for a home and a place of belonging.

The fairy tale fog and isolation of the bait shack enhance our sense of this tidal fantasy as a story that exists outside of reality, and the supporting characters also add to that impression. Thomas Mitchell, a character actor best remembered for more genial or paternal roles, exorcises some inner demons as the trollish Tiny; he's rotten through and through, even if Bobo is too generous to admit it. The usually debonair Claude Rains becomes downright scruffy as Nutsy, a night watchman who befriends Bobo and Anna and encourages their romance. The names of the characters underscore their detachment from a realistic world of details and hard data; we don't know their real names, or where they came from, and tedious facts like those hardly matter. Other characters, including Jerome Cowan's lovelorn doctor and Henry, the bait barge's owner (Chester Gan), drift in and out of the plot as the moment demands. The third act sees a storm break over the lovers and their happiness; both Nutsy and Tiny have their roles to play as the climax hits like a typhoon, violent and terrible. A true noir would have ended differently, and a pure romance would never have gone to such a dark place at all, but the ending works within the context of this genre mingling.