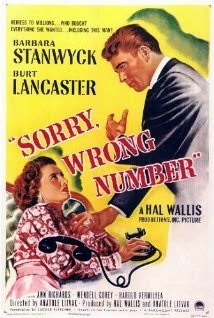 Adapted by Lucille Fletcher from her own original radio play, Sorry, Wrong Number (1948) successfully translates its tale of murder and hysteria into the new medium without losing its connections to its radio roots. Anatole Litvak directs this tense noir thriller, which cranks up the suspense as Barbara Stanwyck's invalid anti-heroine becomes more and more unhinged, convinced that someone is coming to kill her at 11:15 pm on a lonely, hot night in the middle of New York. Great performances from Stanwyck and Burt Lancaster drive the film, which offers an ironic commentary on the way in which a domineering woman's constant manipulation pushes her husband toward increasingly desperate criminal acts.

Stanwyck stars as Leona Stevenson, a wealthy invalid left alone in her New York home when her servants, nurse, and husband all manage to be out at the same time. Needy and irritable, Leona hunts for husband Henry (Burt Lancaster) by repeatedly calling his office and complaining to the telephone operators, but then she stumbles into a conversation in which two men plot to kill a woman at 11:15 that very night. Leona is horrified, but her anxiety only increases as other callers begin to fill in the details of a complicated plot involving Leona, her husband, and the extent of their marital discord.

Stanwyck's performance dominates the picture, and it earned her an Oscar nomination for Best Actress (she lost to Jane Wyman for Johnny Belinda). It was the fourth and final Best Actress nomination of her career, though she never actually won. Still, the role of Leona shows why Stanwyck remains such an icon among classic Hollywood's leading ladies. She can be good, she can even be funny, but she is always most delightful when she's very, very bad. Like Stanwyck's other noir characters, Leona is a combination of strength and weakness; she goes after innocent Henry like a tiger on the prowl, then blackmails him with her tantrums and physical frailty to keep him tied to her and her father's company. She discounts Henry's need to accomplish anything for himself and makes him so addicted to her upper class lifestyle that his original integrity dissolves into base, ugly greed. She loves him and destroys him; the story unfolds to us in flashbacks that reveal how she poached him from a rival (Ann Richards), made him a captive of her father's company, and drove him to crime. At the same time, Stanwyck manages to make us feel bad for Leona, whose terror is very real as the moment of the killing draws near. She wants to save the unknown victim, and she wants Henry to love her. We'd have to be heartless monsters not to pity the sick woman, hysterical and heartbroken, sobbing into the phone as her world comes apart.

The story's origins as a radio play help to explain the way the narrative is constructed, with a single character confined entirely to telephone conversations and flashbacks as actions. There are moments in Sorry, Wrong Number where you can close your eyes and experience the very auditory nature of the events. We constantly hear trains passing, phones ringing, lines disconnecting, and other sounds that add to the mounting tension. Leona communicates with people from her past through the telephone, first her father (Ed Begley), and then Sally Hunt Lord (Ann Richards), and these conversations trigger memories that fill in the years between her first meeting with Henry and their current state. A late revelation from her doctor (Wendell Corey) devastates Leona, while the mysterious calls from Waldo Evans (Harold Vermilyea) make no sense to her but clarify the awful truth to the viewer. The last moments of the picture revel in dramatic irony, since we know something that Leona never figures out. Henry, too, has his moment of poetic justice, with the last line of the movie, "Sorry, wrong number," dripping with the implications of what has just happened. Time is up, and nobody has any more nickels. Such is the very essence of noir.