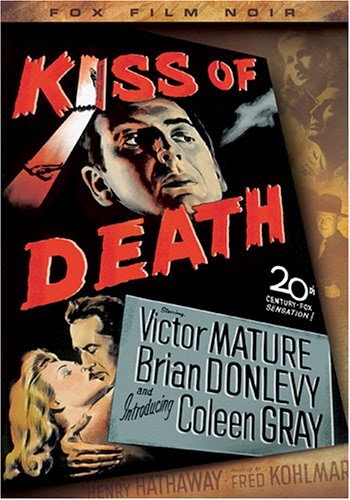 Henry Hathaway’s 1947 Fox film noir has much to recommend it, but Kiss of Death is most notable as the shocking debut of Richard Widmark, whose performance as the picture’s chief villain is so gripping that it scored the Hollywood newcomer an Oscar nomination for Best Supporting Actor. Widmark’s giggling psychopath, Tommy Udo, ranks among the genre’s greatest heavies, but beyond his scenes of sadistic humor Kiss of Death is a surprisingly domestic noir, with Victor Mature as a hard luck case who really just wants to enjoy a normal life with his wife and kids. With no femme fatale in sight and a plot that prefigures key elements of Cape Fear (1962), Kiss of Death is a worthwhile picture that avoids many, if not all, of noir’s cliches while still existing well within its boundaries.

Victor Mature plays Nick Bianco, an ex-con who returns to crime because his prison record keeps him from getting a regular job. When he’s convicted for a jewelry heist, Nick refuses to cooperate with assistant district attorney D’Angelo (Brian Donlevy) because he believes his organization will look after his family, but in prison he learns that his wife has committed suicide and his two little girls have been sent to an orphanage. Nick provides information about his former cronies and manages to rebuild his life with new wife Nettie (Coleen Gray), but his testimony against the murderous Tommy Udo (Widmark) places his entire family in terrible danger.

Like Robert Mitchum, Victor Mature has a face made for noir; his heavy brow and full lips are more striking than handsome, but the shadowy cinematography of the genre plays perfectly across his features. His Nick is a lifelong loser, a product of the underbelly whose own father was shot in the street by the cops, but he still longs for working class respectability. We don’t need D’Angelo’s frequently repeated assurances to know that Nick is really a good guy who deserves as many chances as it takes to turn his life around. One thing that sets Kiss of Death apart from other noir films is the depiction of the protagonist as a devoted and loving father; children are rare in noir’s dark world, but here the two young daughters drive Nick’s actions, both good and bad. He is attracted to Nettie not only because she is young and beautiful but because she loves his children and will be a good mother to them, better even than their real mother, an adulterous alcoholic who abandoned the girls by killing herself. Once Nick has Nettie, his children, and the honest life he always yearned for, he will do anything to protect them, even if that means taking on Tommy Udo all by himself.

Widmark’s gleefully insane killer functions as Nick’s polar opposite; here is a man who desires only power and status at any cost. Tommy initially likes Nick because he perceives him as a “big man,” but Nick has no taste for Tommy’s violent pleasures. Widmark invests his character with a hyper energy that frequently erupts into his trademark giggle, a sound more chilling than most villains’ deepest growls. As a grinning psychopath who relishes his victims’ fear, Tommy clearly gets a thrill out of murdering an old woman by pushing her down a flight of stairs, but he also delights in the notoriety his crimes bring him. When he threatens Nick’s wife and kids, he doesn’t have to spell out the perverse nature of his intentions; we understand the horrific implications of Tommy’s idea of “fun.” The influence of Widmark’s performance can be seen in later deranged killers from Robert Mitchum’s Max Cady in Cape Fear (1962) to Heath Ledger’s version of The Joker in The Dark Knight (2008), but it also informed Widmark’s own career, leading him to play similar types in The Street with No Name (1948) and Road House (1948). Even noir aficionados who find fault with Kiss of Death overall acknowledge the brilliance of Widmark’s turn as Tommy Udo and rank him not only as one of noir’s great villains, but one of film’s most chilling psychopathic characters.